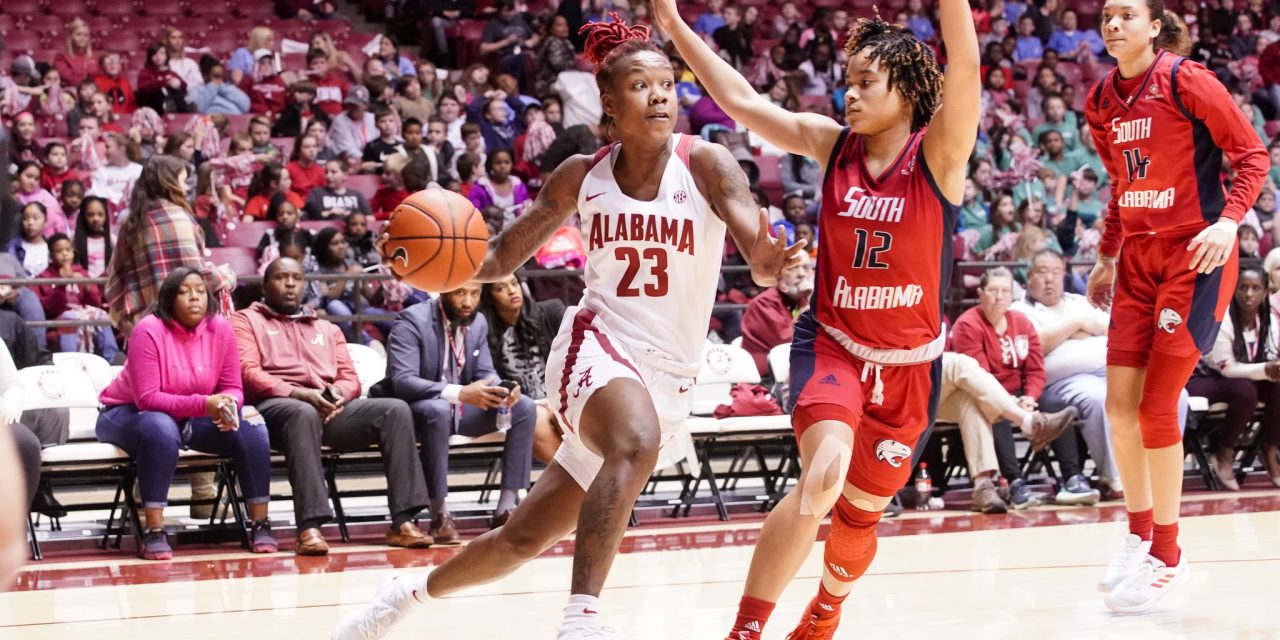 Tuscaloosa, Ala.- The Crimson Tide women’s basketball team returned home Wednesday morning to square off against the university of South Alabama in the annual 5th Grade Fastbreak Classic.

This yearly event allows 5th graders from Tuscaloosa and surrounding areas to pack into Coleman Coliseum to watch an Alabama women’s basketball game. Last season the kiddos got to skip school to watch the Tide take down Jacksonville University 75-60.

In this year’s game Bama looked to snap a two game losing streak, and keep their undefeated record on the home floor.

Previous to the breakfast basketball game, Alabama traveled west to play in the Arizona State Classic. There they had an impossible go at it, losing both games first to Tulsa, followed by an embarrassing 79-62 loss to Louisiana State.

But those games were in the rear view mirror and the Crimson Tide looked to extend their winning record against USA.

That would be no easy effort although as they ran into an undefeated 6-0 Lady Jaguars group. South Alabama hadn’t played any power five schools coming into the game, but had defeated relevant programs like Southern Mississippi.

Alabama flushed their offensive struggles from out west early in the first quarter and got out to a 5-0 lead in the first three minutes of the ball game, feeding off of the energy the high intensity 5th graders brought to the game.

Throughout the remainder of the quarter the two schools would trade baskets, but the Tide would jump out to their biggest lead of the quarter at 18-9 with fifty-six seconds to go after a De’sha Benjamin made three.

In the second period, things stayed consist through the first four minutes. Bama would jump out to their biggest lead of the half at nine points 25-16.

Lack of offense was the key to Bama’s multiple losses in Arizona, and in the last six minutes and forty-five seconds the Tide suddenly reverted to their western selves.

In the last seven minutes of the half South Alabama outscored the Crimson Tide 14-3. This allowed them to silence the elementary schools, gain all the momentum and take a 31-28 lead in the halftime break.

In the third quarter the game went back and forth. South Alabama would lead by as many as seven on two separate occasions, 35-28 and 47-40, but would end the quarter up by only four points 49-45.

Alabama who hadn’t let since the seven minute mark in the second quarter needed more energy from the 5th graders with a much better offensive effort of their own if they wanted to snap their losing streak.

The Crimson Tide would mount and exciting comeback although, getting every ten year old in the building on their feet.

After a Cierra Johnson three and two Jasmine Walker buckets, the Tide found themselves down by only two with a minute and half to go, 65-63.

The comeback would fall short though, as the Jaguars went on a 6-2 in the next minute that would be enough to close out Alabama.

The final tally read 72-67 in favor of South Alabama keeping them undefeated on the year. This also marked the third straight loss for Kristy Curry’s bunch.

Bama will look to snap this losing streak on Saturday at 2 pm as they play host to Tulane. That game will be the second of three straight home games, before the team heads to Florida to participate in the Florida Sunshine Classic.

Track and field splits up for last meet before SEC competition