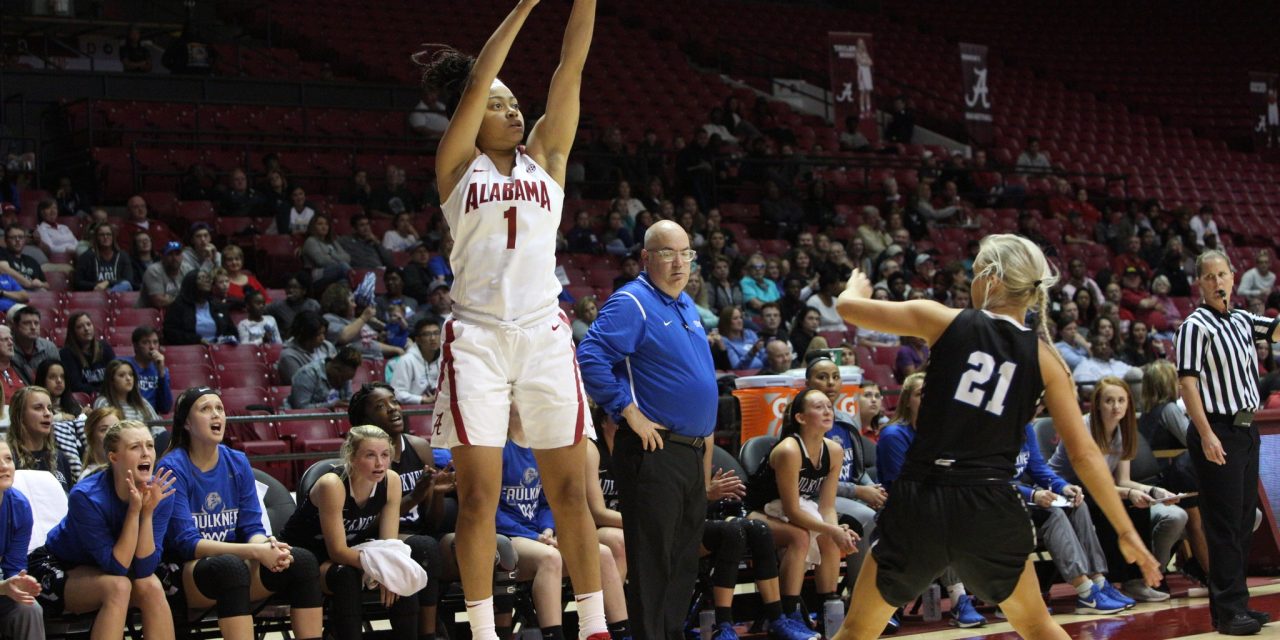 Tuscaloosa, Ala.- The Alabama women’s basketball team hosted Tulane University on Saturday afternoon as they looked to snap their three game losing streak.

The Crimson Tide began this drought just a week prior in Tempe, Arizona as they dropped both other Arizona State Classic games to Tulsa followed by Louisiana Tech.

The Tide would then return home to face an unbeaten South Alabama team that snuck out of Coleman Coliseum with a 72-67 victory, if front of three thousand of Tuscaloosa’s finest 5th graders.

To break this streak they would need to bring courage, as their opponent the mighty Green Wave of Tulane had a lofty 7-1 record coming into the game.

Tulane was already the third team in Alabama’s young season to hail from Coach Kristy Curry’s home state of Louisiana.

Their only loss came to the #18 Cal Golden Bears 65-57. They had already beaten schools like UA foe LSU, and other power five schools like Washington University.

To begin the game Bama showed signs of life, shutting down the wave that rolled into Tuscaloosa, leading by nine, 11-2 after the first five minutes.

In the only game that Tulane has been defeated offense has been the obvious problem and that was the case yet again in the first quarter. In the first six and half minutes of the game the Crimson Tide allowed only three points, scoring fourteen of their own.

This defensive surge by Alabama would continue in the last three and half as well holding TU to just nine points on the entire quarter, taking a commanding 23-9 advantage at the first break.

Bama showed why they dropped the past three games in the second quarter although, not scoring a single point until over eight minutes into the quarter.

The drought was by far their biggest scoring gap of the season. Not to mention went on a 9-0 run of their own during those eight minutes bringing the lead back to five at 23-18.

The Tide flushed their poor second period efforts in the last two minutes and closed out the half on an 8-2 run, getting their lead back out to a comfortable eleven points 31-20 heading to the locker room.

Not much would change in the third quarter as Bama tied their biggest lead of the game at the 5:07 mark, fourteen that being 42-28.

After a Jordan Lewis three point basket the Tide claimed their biggest lead to that point 45-28.

The two teams would trade baskets down the stretch in the final four minutes of the third quarter but Alabama ended the period with a 51-37 lead, with just ten minutes remaining.

Just ninety seconds into the fourth quarter the Crimson Tide hopped out to a 55-37 lead.

Jasmine Walker who had monster quarter up to the point scoring six of the Tides twelve fourth period points gave Alabama their biggest advantage of the game 63-43 with four minutes to go.

In the next two minutes Tulane went on a 8-0 to get the lead back down to twelve.

But no run would be enough to stop Alabama from breaking the chain on their three game losing streak, the Tide would go on to win the game 69-58.

This win improves the record to 6-4 on the year, as they now look to win the second straight against Northwestern State a week from Sunday.

The team will be taking this one week break due to final exams.