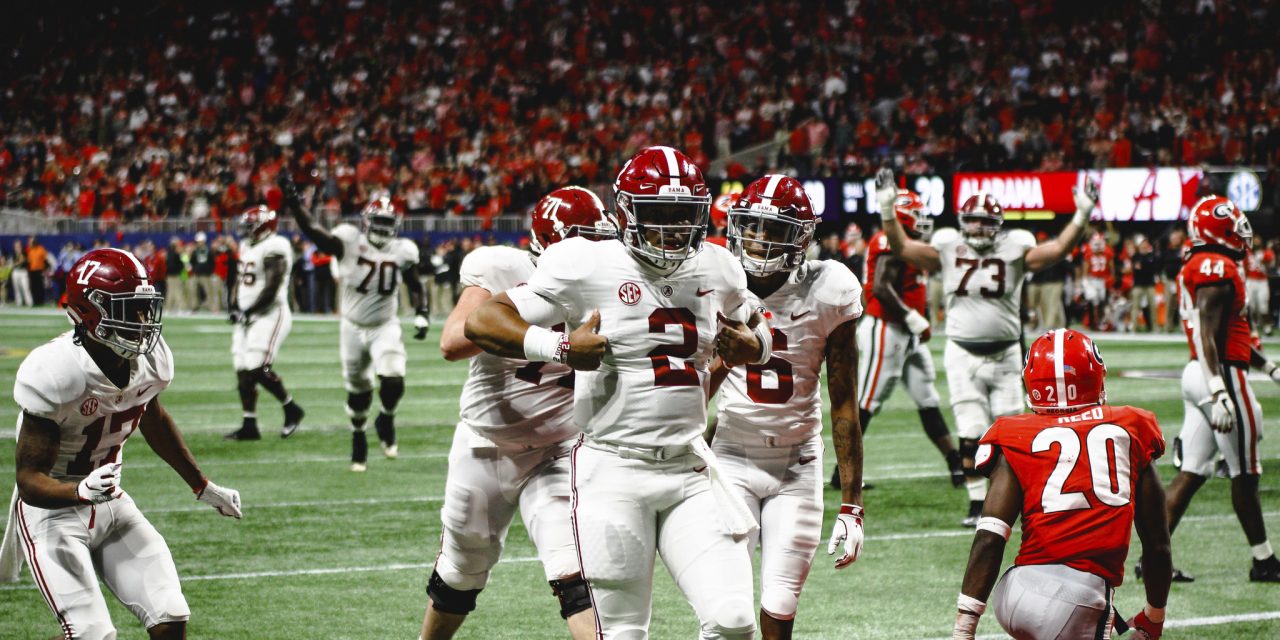 Atlanta, GA – With roughly 11 minutes left in the 2018 SEC Championship Game, Jalen Hurts was forced to take over for an injured Heisman hopeful, Tua Tagovailoa.

Just under 11 months ago Tua took over the starting job after a stellar second half against the Georgia Bulldogs in the 2018 National Championship game that gave the Crimson Tide their 17th national title. It was in that same game when sophomore quarterback Hurts lost his job of two years as Alabama’s main passer.

Now, 11 months later, with 11 minutes remaining against the same team, in the same venue, Hurts had the opportunity to quiet his doubters, who seemed to be the people with the loudest voices, especially on social media. They were the ones who called for him to be benched, to transfer or to switch positions. However, Hurts never gave into all of the noise; instead, he stayed, he worked and he waited for his chance to come back and show that he was not the quarterback the public framed him to be.

Shortly before the season began, Hurts addressed the media.

“The funniest thing about all of it is that I’ve never said a thing,” he said.

He remained quiet in the offseason amid what many members of the media were calling a “quarterback controversy” going on in Tuscaloosa. He also stayed humble and quiet watching from the side as Tagovailoa became the starter and a new hero to the city labeled “Title Town.”

It seemed as if many had forgotten that Hurts had taken the team representing Title Town to two National Championships, but he hadn’t.

Hurts knew his worth and what he could do for the team, which is why he made all 11 minutes count.

With a 7-point deficit he took the field and viewers across the country felt as if some sort of prophecy was being fulfilled.

Hurts threw 7 completions on 9 attempts (78 percent), one of which was a touchdown pass to Jerry Jeudy to tie the game at 28 with just over five minutes remaining. He showed the world how he evolved in those 11 months by staying in the pocket, looking at all his available receivers, and having patience; a big turnaround from his style of play in the previous two seasons.

He also did what many people feel he does best escape the pocket and take off. Hurts rushed five times for just under 30 yards. 15 yards of his 28 came with 1:04 left on the clock as he dashed and was tackled into the end zone to give the Crimson Tide a 35-28 lead in the 2018 SEC Championship.

MVP voting ended with 5 minutes left in the game (4 seconds after Hurts threw the game-tying touchdown pass to Jeudy) and Josh Jacobs received some much deserved credit as the MVP. Yet maybe that piece of history would be rewritten if voters got to see Hurts’ performance before voting.

Jalen Hurts’ comeback win doesn’t spur talks of a new “quarterback controversy” for the reigning National Champions, rather it allows Alabama fans and college football fans to have a new appreciation for the 20-year old quarterback that bleeds crimson.

Reliving the Tradition with Bob Baumhower