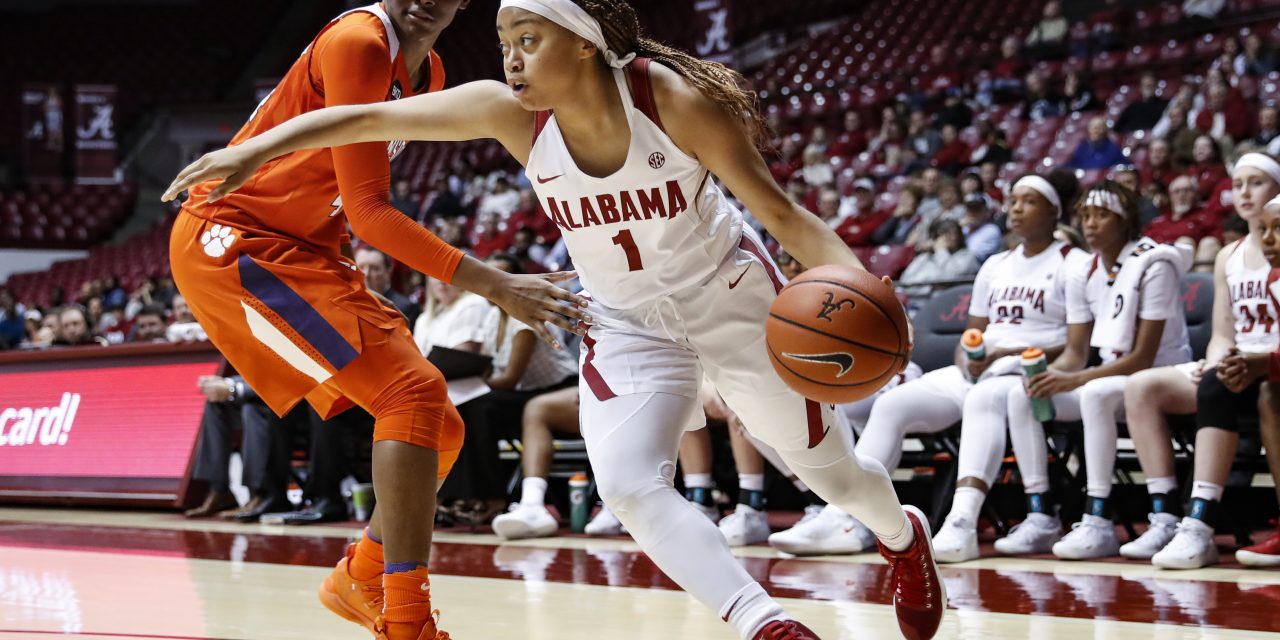 Tuscaloosa, Ala.,  The Alabama women’s basketball team hit the hardwood Monday night for the first time in Tuscaloosa in nearly two weeks. Returning home from their two game western swing, that included stops at Utah and SMU, the Crimson Tide looked to improve their record to 3-1 as they faced off against the Clemson Tigers.

They pulled away to a smooth 82-53 victory in game one against SE Louisiana in Coleman Coliseum, then fell to the Utes in their 1st road game of the season 72-62, but were able to recover and survive an overtime battle in Dallas against the Mustangs of Southern Methodist 62-61, bringing them back over .500 for Monday evenings showdown with the Tigers.

Clemson just six seasons ago suffered a loss to Anderson University a Division 2 program out of the Heartland Athletic conference, going on to win only a total of five games that year marking their program’s rock bottom. Since then things have slightly improved, but slightly may even be a bit generous considering they finished 0-16 in the ACC during their 15’-16’ campaign.

This year the Tigers look to turn the page, and are making a valiant effort so far winning four out of their first five, before getting on the bus to travel down to T-Town.

It was the fifth all time meeting between the two schools, the first since 1992, and would leave one of the two teams with bragging rights being that the series was tied at two games a piece coming in.

Although before the game could even get underway both teams and everyone in the building were given a chilling scare when a roughly three foot metal pole plummeted from the ceiling, fortunately not landing on any human beings, and only leaving a mere scuff just near half court.

Alabama flushed the shock before game time, and took advantage of a Tiger defense that only allowed 26 points in their previous game against Lipscomb University, scoring 17 first quarter points while holding Clemson to 12. The Tide went down early, but would make an 8-0 run at one point and force 10 turnovers giving them the 17-12 edge heading to the second period.

In the second quarter the Tigers would pull the lead back within a point at 18-17, but an offensive explosion allowed the Crimson Tide to take a 15 point 41-26 lead into the halftime break. Alabama shot an incredible 55% from behind the arc in the first half, and went on a 13-2 run to close out the first twenty minutes of action.

The offense would continue on their tear in the third quarter of play, matching their 24 point effort from the second period and only allowing the exact same number of points as they did in the second as well, 14. Alabama would lead by as many as 27, but would allow a minute comeback still giving them a commanding 25 point lead heading into the fourth quarter.

In the final period the Crimson Tide’s offensive rampage slowed just a bit, only scoring 11 points, but the defense kept pace allowing just 16 of their own. 76-56 would show as the final giving Alabama their third win of the season and certainly their most impressive. The Tide finished the game with a remarkable 52.6% 3pt percentage.

Bama will square off against the Tigers, this time the Tigers of Grambling State on Friday at 2:00 pm in Coleman Coliseum as they seek a 4-1 start.