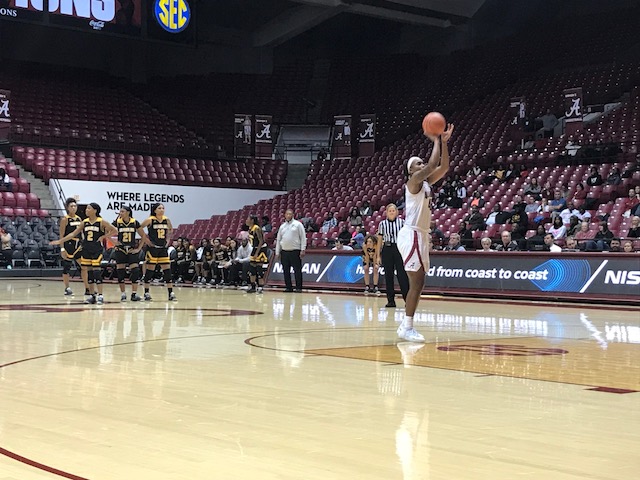 Tuscaloosa, Ala. The Crimson Tide women’s basketball team rode a two game win streak into their black Friday date with the Lady Tigers of Grambling State. In the previous effort on Monday night Alabama shot unconsciously making ten out of nineteen three point baskets, leading them to a blowout win over the Clemson Tigers.

This time a different Tigers came to town, this one from the pelican state of Louisiana. GSU entered the ballgame with a 1-3 record suffering losses to Auburn, Southern Mississippi and UT Arlington all on the road, with their lone win coming at home against Mcneese State University.

The last time these two schools squared off against one another was just a season ago in Coleman Coliseum, UA rolled to a dominant 73-49 victory keeping the series record a perfect 7-0. Although, Grambling State would find a way to win the Southwestern Conference championship later in the season and advance to their sixth all-time NCAA tournament, where they would watch Baylor cruise to a fifty point 96-46 victory in the first round.

This year the Lady Tigers had revenge on their mind, led by senior Shakayla Hill, who averaged 15.8 points a game coming in.

Tryptophan is an amino acid often found in Turkey meat, that is commonly known to make you tired after consumption. In the first quarter it was evident that the Crimson Tide’s Thanksgiving feast, just a day before, left traces of this amino acid in their system due to an extremely sluggish start on both ends of the floor. Trailing by twelve at one point and not getting their first basket until nearly three minutes into the game, Alabama found themselves down 19-9 with two minutes remaining in the period.

A 5-0 run in the last one hundred and twenty seconds by the Tide would bring the score back to 19-14 heading the second quarter, swinging the momentum back to the home team along with it.

Alabama would cut the lead back to three within the first twenty seconds of the period after two made free throws by Ariyah Copeland, tie the game 19-19 with a corner three from Shaquera Wade in their next trip down the floor, and take the lead just forty-five seconds later on another field goal by Copeland 21-19.

This lead would never feel secure for the Crimson Tide during the remainder of the first half. Though they didn’t surrender the lead at any point, GSU tied the score on four separate occasions, and trailed by only two 33-31 heading to the locker room.

A large key to the underdog Lady Tigers keeping things close in the first two quarters was their ability to shoot 60% from beyond the arc, making three of their five attempted three point shots. They would need to bring much in the second half, though, if they had any chance of pulling off the upset.

The opposite would happen, although, as Alabama went on defensive lockdown to begin the third quarter only allowing six points in the first seven minutes, allowing them to take a twelve point 49-37 lead. The Crimson Tide would go on to score twenty points in the period putting them up 53-41, a comfortable lead heading into the final quarter.

Alabama’s supremacy continued early in the fourth quarter, going up by as many as sixteen. A mid-period full-court press inflicted by Grambling State allowed them cut the lead back to eleven, but the deficit would never see single digits.

The Crimson Tide would go on to win the game 73-55, improving their record to 4-1, remaining undefeated at home at 3-0. This victory also marks the third game of their win streak a streak they hope to keep alive at home this Tuesday against Stetson University.

Two sophomores Jasmine Walker and Ariyah Copeland had their career highs in the game, Walker with 24, Copeland with 18.

After the game head coach Kristy Curry talked about how encouraged she was by the performance, “You have to defend your home court and you half to learn. Right now we’re an open book, and each and everyday we’re writing a page in that book, and with so many new faces it’s important at the end to look back and see a really really good novel that we’ve finished.”