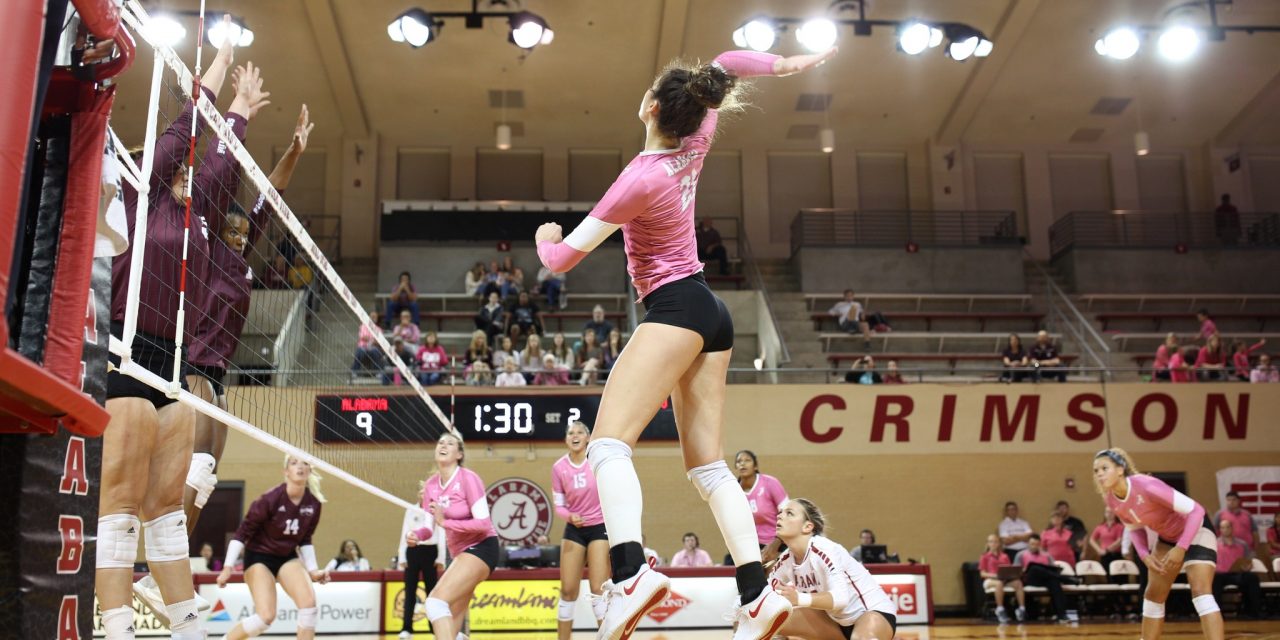 Since 2005, starting with the Alabama Crimson Tide’s gymnastics team, teams have made it their goal to raise awareness for Breast Cancer and other types of cancer with their annual “pink-out” games. This tradition has made its way all across campus and now onto the volleyball court. On October 17, the Crimson Tide Volleyball team took on Mississippi State at Foster Auditorium for a primetime SEC matchup.

The Tide, 15-6 (2-5), coming off of a tough loss at the hands of the Florida Gators on October 14th. Looking to bounce back against a struggling Mississippi State team who came in 5-15 (1-6) looking for an upset.

In the first set, the nation was non-stop. The score went back and forth, until the Tide shifted into another gear to go on a 14-3 run to finish off the Bulldogs 25-17 in the first set. This run was sparked by Sophomore Doris Carter and Junior Mahalia Swink.

The second set started off slowly for the Tide as the Bulldogs got out to an early lead. Yet, the Tide rolled back with some great hustle plays by Kaylee Thomas who provided some great digs that helped bring the Tide back. This set did go down to the wire, but the Tide proved victorious by winning 28-26 to jump out to a 2-0 lead.

Lastly, the Tide made quick due with the Bulldogs and finished them off 25-15 in the last set to seal their victory. The players of the game were Doris Carter who finished with 13 kills and Quincy Gary who moved up to 4th all-time for career digs.

Junior Mahalia Swink said it was a great team win for them while adding, “We lost 3-0, so it was really great to come back home and win 3-0 to help us mover forward.”

Coach Ed Allen was very pleased with his team’s performance saying, “We’re confident enough moving on to Arkansas on Sunday, but we always are looking to improve and we’re always striving to be better and it’ll have everything to do with how we finish with SEC play.”

On Sunday, the Tide look to take care of another SEC opponent as they take on the Arkansas Razorbacks in Fayetteville at 1 P.M. CT on SEC Network.

(Photo courtesy of Joseph Field and The Crimson White)

Alabama soccer eliminated after first round of SEC tournament