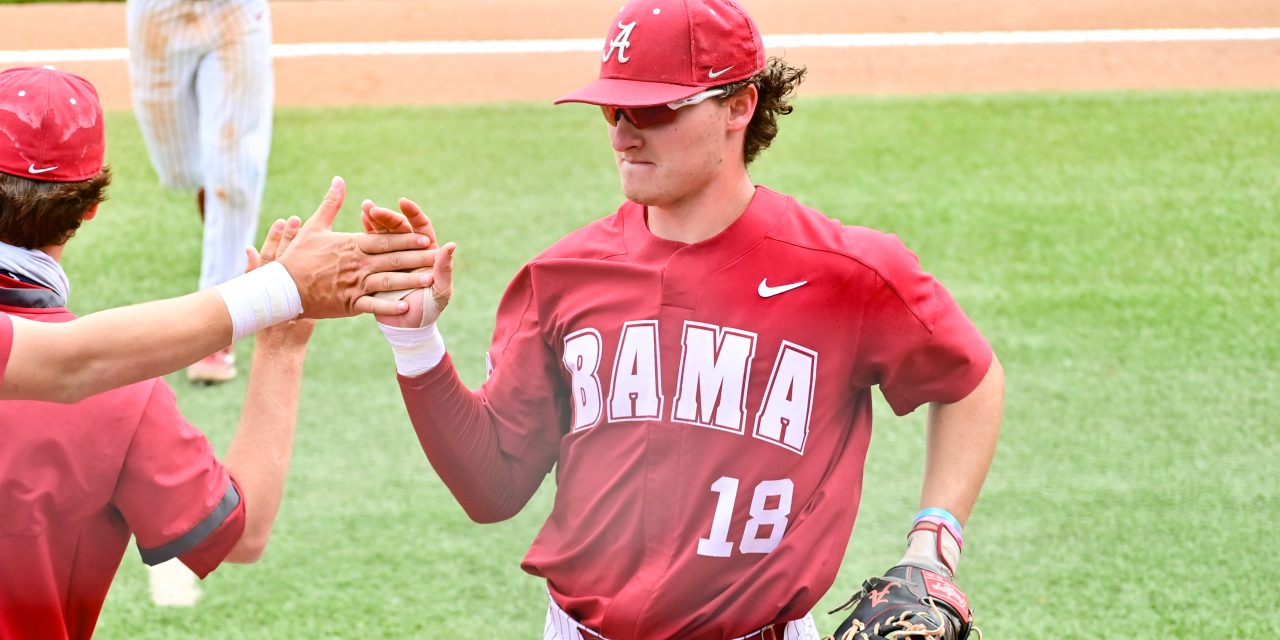 The Crimson Tide secure the win to open the series with an impressive 10-1 rout over the Kentucky Wildcats at Kentucky Proud Park on Friday evening. This win advances the Crimson Tide to 24-13 on the season and 8-8 in conference play, while Kentucky drops to 22-13 as well as 7-9 in SEC competition.

After a scoreless opening inning, the Crimson Tide got on the board first, with a RBI double by Owen Diodati to bring in T.J Reeves for a 1-0 lead. Alabama would get the hot hand once again with two more unanswered runs in the top of the third, with William Hamiter bringing in Peyton Wilson on an RBI triple. This was followed by Sam Praytor’s RBI single to right field to bring in Hamiter.

The Wildcats would finally end the shutout with a solo home run to set the score at 3-1 with an Alabama lead at the end of the fourth inning. After two scoreless innings from both sides, the Tide would go on a hot streak to bring in seven runs in the top of the seventh. This set the score at 10-1 Alabama, where it would stay as the final two innings were scoreless. Leading the scoring rout in the seventh were Reeves, Diodati, and Jim Jarvis each brining in runs for Alabama. A walk by Zane Denton would kickstart this hit streak, which was then capitalized on through Williamson being hit by a pitch, as well as a wild pitch to bring in a run after Diodati’s at bat. The Tide finished this contest with six extra base hits, however, none of which that were home runs in contrast to many games this season.

Tyler Ras put on an excellent pitching performance, as well as a career high pitch count of 99 pitches in Friday’s contest. The Alabama junior also set a career record of six strikeouts, and gave up only one run in seven innings pitched. Ras received the win and will move to 6-1 on the season. There would be limited support needed from the bullpen to close this one out, as Hunter Ruth would finish out the game for the Tide as the only pitcher in relief for the contest and would record two scoreless innings. Through nine innings Ruth and Ras combined for a total of zero walks, as well as only three hits.

Alabama's loaded backfield is a 'good problem to have'