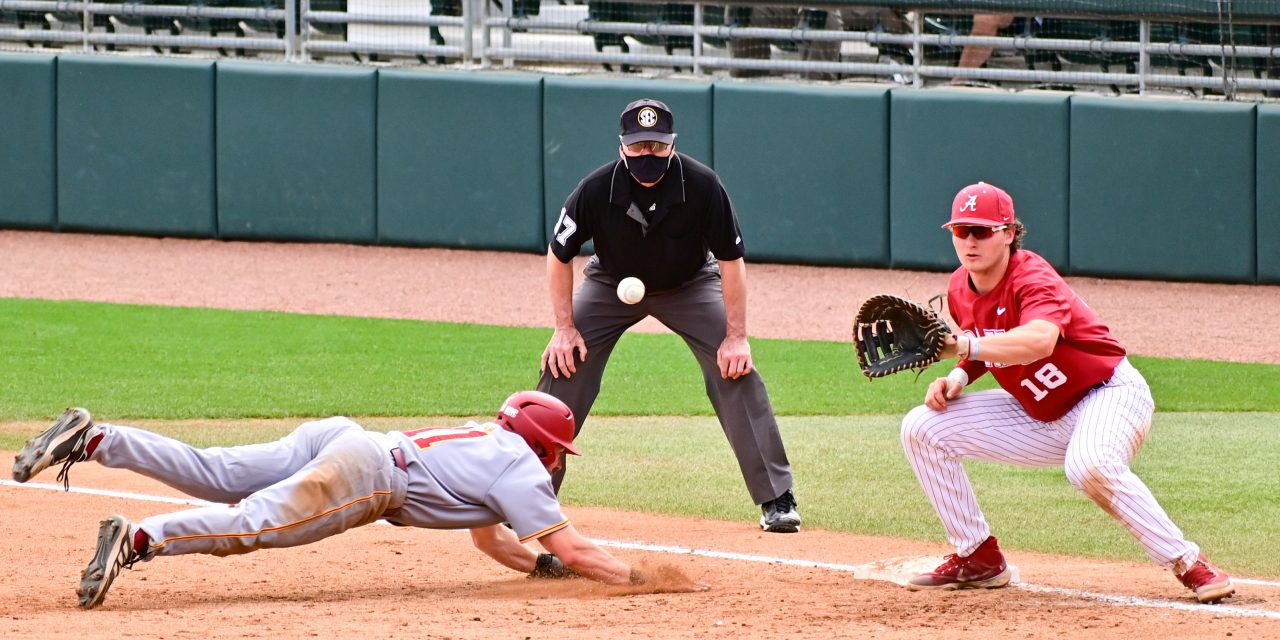 It was a beautiful day at first pitch here in Sewell Thomas Stadium in Tuscaloosa, Alabama as the Crimson Tide would take on the traveling University of Louisiana Monroe Warhawks.

Freshman Grayson Hitt got the start on the mound for the Crimson Tide. He started off by striking out the Warhawks leadoff hitter, but what followed was trouble. After walking the next batter and giving up a single to the third hitter in the lineup, ULM’s Danny DeSimone took Hitt yard giving the Warhawks an early three to nothing lead. The first two innings for the Tide resulted in two hits, Hamiter and Williamson, but no runs were scored as both runners were left on base.

In the top of the third inning, after getting two quick outs and a Warhawk single, Head Coach Brad Bohannon will go to the bullpen by calling upon right hander William Freeman to relieve Hitt on the mound for Alabama. The runner who singled was thrown out by catcher Sam Praytor while trying to steal a base to end that half of the inning. In the bottom of the same inning, the Tide’s bats had come out. Shortstop Jim Jarvis lead off the inning getting hit by a pitch followed by a hard hit single by the Tide second baseman Peyton Wilson which would advance Jarvis all the way to third base. Designated Hitter William Hamiter would then hit a sacrifice fly out to score Jarvis to make it a 3-1 Warhawk lead. Third baseman Zane Denton came up to the plate and doubled scoring Wilson from first drawing the game closer at 3-2.

From the fourth through the seventh inning, pitching was the highlight for both teams as no runs were scored. In the top of the 8th Bryce Eblin came on to pitch for the Crimson Tide and was immediately challenged by the Warhawk offense. ULM scored two runs in this inning off of a Micheal Cervantes single into right field making the score 5-2 Warhawks. Eblin shut down the Warhawk offense in the 9th carrying the way for a Crimson Tide comeback. After a late 9th inning rally from the Tide they only scored one run making the final score ULM 5, Alabama 2. Alabama will travel to College Station this weekend for a series against the Aggies as they look for their first in-conference series win.