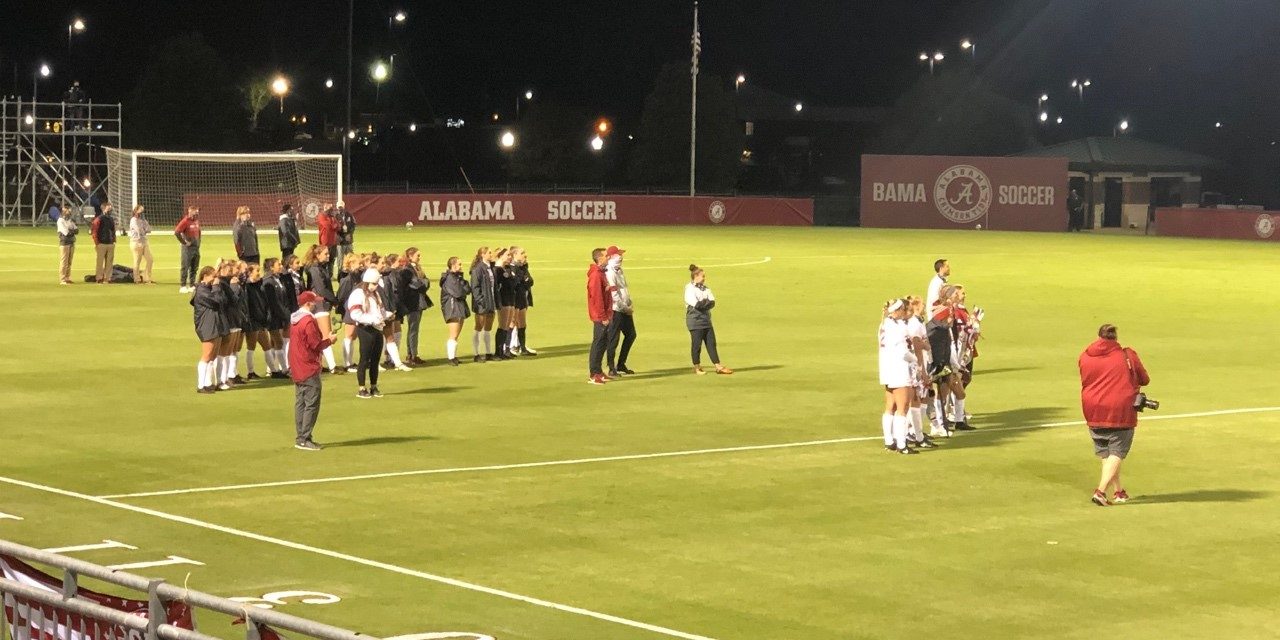 TUSCALOOSA, Ala. – The Texas A&M Aggies traveled to Tuscaloosa to play the Crimson Tide’s
first home game under the lights (and a full moon) in the Alabama Soccer Stadium on Friday,
Oct. 30: Senior Night.

The Aggies, ranked eighth in the nation and second in the SEC West, won 2-0. The Crimson Tide
is now sitting second-to-last in the SEC West with a record of 1-4-2.

This game was one of firsts and lasts for the season: the first home game under the lights, the
first game in Tuscaloosa where fans wore winter clothes, the last home game of the season,
and the first of many final year celebrations for the eight seniors listed on the Crimson Tide’s
roster.

Before the game, Ben Smith – former UA student and current appointed fan-section hype man
– handed out shakers and warmed the home fans up for the senior recognition.

About 15 minutes left before kickoff, the Crimson Tide took the field and the Aggies left. Each
of the eight seniors were called up to take a photo with head coach Wes Hart, receive flowers,
be individually acknowledged and celebrated, and thank their family and friends. Each senior
was met with applause from the audience and rowdy cheers from their teammates. After, the
seniors journeyed toward midfield to watch a video of their UA highlights and childhood soccer
memories on the jumbotron while the rest of their teammates watched behind them.

The majority of Alabama’s fan section was made up of seniors’ family and friends. There was
also a small number of Texas A&M fans, and – as always – a group of fans tailgating outside the
stadium to cheer on the Tide.

Texas A&M took the lead early. Taylor Pounds scored for the Aggies less than a minute into the
game. This was Pounds’ first goal of the season.

Both the Tide and the Aggies had opportunities throughout the first half, but the second goal of
the game did not come until the 67th minute. Laney Carroll managed to put the ball in the net
after catching Mckinley Crone off her line and beating a goal-line-save attempt from Kaley
Verpaele. This was Carroll’s second goal of the season.

The Tide did not go down without a fight, but ultimately was unable to find the back of the net
and suffered its second shut-out loss of the season.

The Crimson Tide will travel to Auburn, AL to face the Tigers on Friday, Nov. 6.

Auburn University (3-1-2) sits third in the SEC West and is ranked 15th nationally. The Tide will
not finish the season ranked higher than sixth in the SEC West. If the game ends with an
Alabama win or draw, the Tide will not drop below Louisiana State University to seventh.

The game was originally scheduled for Sunday, Nov. 8, but was moved up to Friday, Nov. 6 due
to scheduling changes stemming from COVID-19 concerns and postponements earlier in
Auburn’s season.

The game will kick off at 6 p.m. CST and will be broadcast on SECN+.