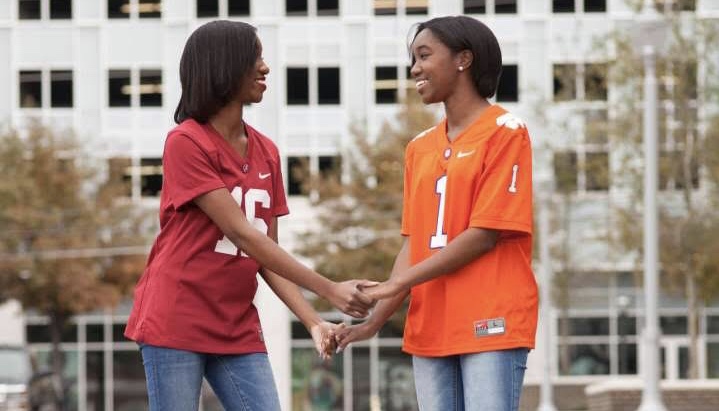 Garcy and Gaby Lawson are twin sisters from Broward County, Florida that share a lot. Growing up they shared the same school, birthday, parents and love for football.

While they have a lot in common, they also have a lot that separates them.

For example: they have different haircuts, Garcy is older by one minute, Gaby is taller by an inch and a half and they attend different college football powerhouses.

Garcy attends Clemson University and Gaby is enrolled at the University of Alabama.

Their love for the game started later than most football enthusiasts, but they were introduced to the sport at a very young age. They would sit with their parents and watch legends play the game; players they listed as legends were: Drew Brees, Brett Favre, and Peyton Manning.

Watching it at home from a young age is what laid the foundation for their expansive knowledge of the NFL. They then cite a single high school football game from their sophomore year as the experience that got them hooked.

“We probably missed a combined total of three games from sophomore to senior year of high school.”

They did more than just attend almost every game their high school team had; they checked out books and genuinely studied the game to get a full grasp on the sport.

I had initially thought siblings from these two schools, who are about to play for the fourth consecutive time in the playoffs, was a recipe for disaster and a stereotypical case of a house divided. However, what I found was a family that took their football seriously, but remembered that family is bigger than the game.

The first question that popped into mind was if either of their parents had attended Alabama or Clemson.

Garcy and Gaby said their parents do try to stay neutral; but with Alabama constantly winning, “they’d be happy to see Clemson come out on top for a change.”

Another question I had was about the trash-talking.

We all see the vulgar comments made on social media from one fan to another; well, instead of doing it publicly, they crack typical college football jokes in a family group chat. While there are some light-hearted jabs being thrown around, it never gets too serious.

In fact, they told me that “Every play is critiqued,” and “During games, the chat is never silent.”

They said that their original plan all throughout high school was to go to college together. That plan was foiled second semester of senior year during a college tour when Gaby fell in love with Tuscaloosa, Alabama and Garcy knew her heart belonged in Clemson, South Carolina.

Despite them both attending the top football schools in the nation, it didn’t factor into their decisions:

“We didn’t choose these schools because they were ‘football schools’. We chose them because they offered us programs that could prepare us for our dream careers.”

Football was an aspect they had looked at, as Garcy had declined a full scholarship offer to a school because they did not have a football team. Both Garcy and Gaby wanted to do what was best for their future careers and for their school spirit.

Typically they would watch the Alabama and Clemson matchup together and treat it like a Super Bowl watch party where no one is ever too upset with the outcome. This year Garcy and Gaby will be heading back to their respective schools to watch the game with friends; but the family group chat will most definitely be active.

Despite being rivals on the football field, they remember that they are sisters,

“People ask us all the time if we would ever transfer schools to be with each other. But honestly, we wouldn’t have it any other way! Roll Tide and Go Tigers!”

(Photo courtesy of the Lawson Family)

Christine Jarman steps up for the Crimson Tide

Alabama closes out road schedule with a strong performance against Georgia