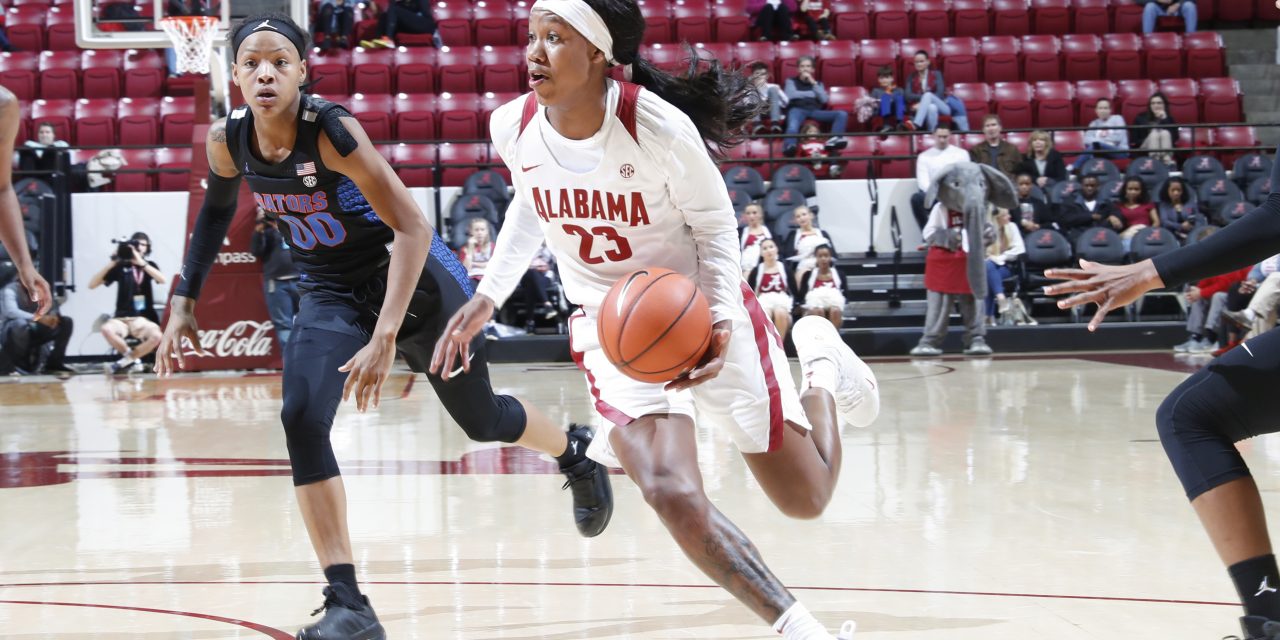 TUSCALOOSA, Ala.- After a lopsided defeated against the Hurricanes of Miami to close out non-conference action, the Crimson Tide women’s basketball squad looked to get revenge against the Sunshine State as they took on the Florida Gators Thursday afternoon.

The Tide fell to the twenty-fourth ranked Hurricanes 101-74 on December 21st in their final game of 2018, to finish their non-conference schedule 8-5.

Their date on Thursday the University of Florida had a much more difficult go at it leading up to SEC play finishing their non-conference at 4-9.

To start the season UF dropped their first six matchups including ugly losses to Gardner Webb, Mercer and Northeastern.

“It just means more” the SEC’s coined phrase would have to ring true for both teams during conference play if either had any chance of going dancing in March.

In the opening minute of action the Crimson Tide hopped out to a 3-0 lead courtesy of a Jasmine Walker long-ball, but the tables would turn instantly in the next four minutes as Florida went on a 13-2 run to take an eight point lead with five minutes to go in the period.

That 13-2 run would turn into a 21-2 run in the next three minutes allowing the Gators to take a sixteen point 21-5 advantage with just two minutes to go in the first.

Alabama would score just three more points in the quarter and trail 25-8 with thirty minutes to go. Eight points was Bama’s lowest point total for a quarter of the entire season.

This monumental scoring drought would only continue in the second quarter as the Tide put up just one point in the first three minutes. With six and half to go in the period they faced their biggest deficit to that point at 29-9.

Even after the slowest start of the entire season, the Crimson Tide found a way to keep playing hard going on a 9-0 run to cut the lead back to eleven with four minutes to go in the half.

Florida would get their lead back out to sixteen in those final four minutes but a strong 12-3 effort to close out the second quarter showed Bama trailing by a mere seven points 37-30 at the break.

The Crimson Tide offense who caught fire at the end of the first twenty minutes would continue to smolder taking a 39-38 advantage for their first lead of the game four minutes in to the third quarter.

With help from an aggressive paint mindset by Cierra Johnson the Tide would take back the lead with a 7-0 run to end the third quarter giving them a two point 51-49 lead with ten minutes to go.

In the first four minutes of the final quarter Alabama never gave up the lead but had little room to breath never leading by more than five.

Halfway through the quarter UF tied the game and took back the lead once again 63-61.

In the last five minutes the two schools traded buckets and the lead along with it, but with forty-two seconds to go Bama took their biggest lead of the game after two Shaq Wade free throws 70-64.

The Crimson Tide made every free throw they attempted in the last minute of play to put the final nail in the coffin of their first SEC opponent rolling on to a 74-67 victory over the Gators.

The victory improves Alabama’s overall record to 9-5, now 1-0 in the conference.

The Crimson Tide will continue SEC play on the road against the 2017 National Champion Lady Gamecocks of South Carolina Sunday at 11:00 am CT.