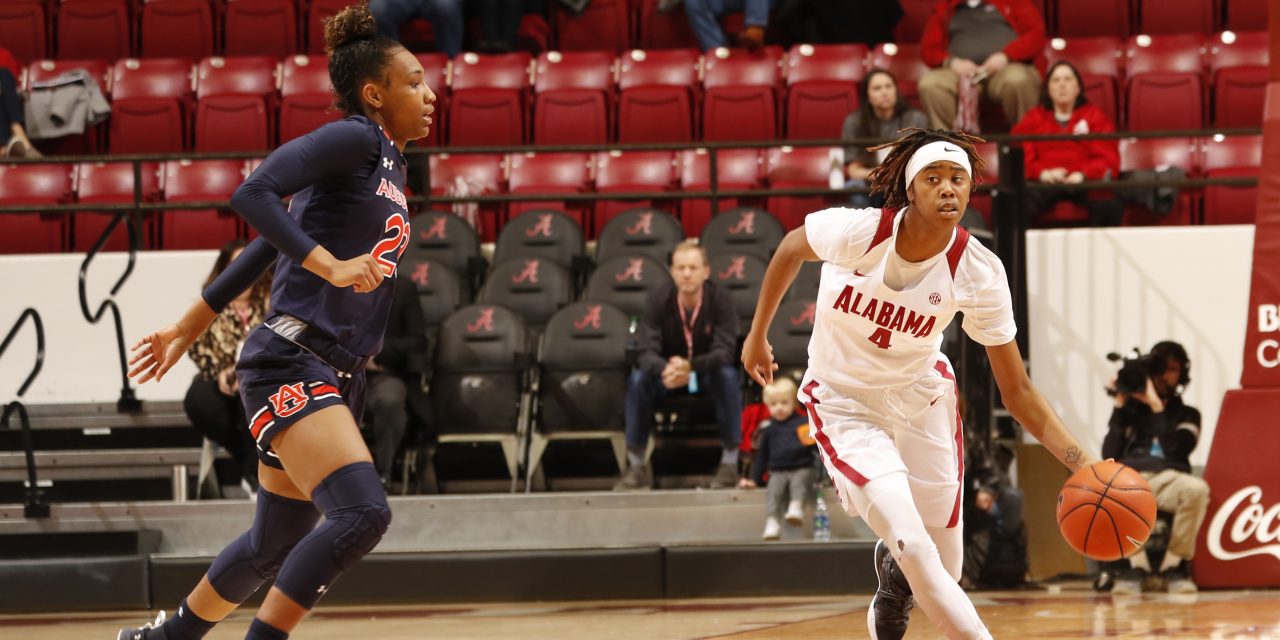 The now 9-7 (1-2 SEC) Crimson Tide came out of the gate early shooting 3-5 from beyond the arc with successful conversions from both Jasmine Walker and Shaquera Wade to make up a quick run. Auburn, however, was lead by Crystal Primm and a steady attacking offense in the paint as they closed the quarter 17-13.

Bama had their worst 10 minutes of the game in the second quarter as they were outscored by the Tigers 19-10. Auburn’s Janiah McKay (8 pts, 3-7) and Crytal Primm (10 pts, 5-9) would both get their midrange falling in the latter half of the quarter. Walker and Wade continued trying the three ball for Alabama as they finished 4-8 and 3-6 respectfully from the outer range. Alabama’s Cierra Johnson would hurt the team’s 8-23 night from three with her 0-6 performance and eight points.

Bama would be down by as many as 15 points before Cierra Johnson finishes the first-half on what would be a 3-point play to close the opening half 23-36.

The Crimson Tide kept launching and they kept rebounding to start the second as their 13-5 offensive rebound advantage and 33-27 overall would help them close the gap. Bama’s Auburn and Bama’s leading scorers Daisa Alexander and Jasmine Walker would exchange threes with 5:44 remaining in the third to make it an-11 point game.

Bama lost the turnover battle by a whopping 17-25 margin but would be able to capitalize off an auburn mistake with Cierra Johnson’s fast-break floater to chip the lead under 10 for the first time since midway through the second.

Wade would convert on an outlet pass to bring the Tide to their closest margin at 38-43 with three minutes left in the third.

One of the game’s turning points came from Auburn’s backup forward Abigayle Johnson. The freshman stopped Alabama’s momentum coming from transition points with a converted three-point play to make it an 11-point game with two minutes to go in the third.

Auburn’s consistency would prove to be too much for Alabama after Tiger’s coach Terri Williams-Flournoy’s early fourth-quarter timeout. The lead would hover around 10 for the rest of the game as Primm and Alexander exchanged layups to mak the score 57-46. Bama would then call a timeout and go into desperation mode further damaging their 40 percent shooting night in a 56-66 loss at Coleman.