Alabama WBB Tops the Hoos in Game 1 Under the Sun 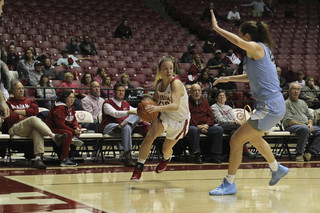 The UVA Cavaliers, also referred to as the Wahoos, took the hardwood Thursday with a 4-6 overall record coming off of a difficult loss to Raford 57-44.

Alabama was already Virginia’s third SEC matchup of the season, the fell in both of their first two games 72-44 to Mississippi State and 63-51 to Kentucky.

The Tide on the other hand had all the momentum in the world. Just five days before, head coach Kristy Curry picked up her 400th career win as a head coach against Northwestern State with an 87-73 victory.

Alabama was also in search of their third consecutive win after beating Tulane 69-58 just one game prior.

The Crimson Tide began the ballgame by taking a six point lead through the first four minutes 8-2. They would lead by as many as eight several times throughout the first quarter, but would never surpass that mark taking a 17 to 9 lead as the first period buzzer sounded.

Jordan Lewis was on first through the first ten minutes scoring eight of Bama’s seventeen at that point in the game.

In the first three and a half minutes of the second quarter the Tide continued to flex their muscle getting out to their biggest lead of the game by thirteen points 27-14.

The Hoos would take the next minute and half to go on a 7-3 run cutting the lead back to seven at 30-23.

Neither team would score for the next three minutes until there was only two remaining in the quarter, but in those one-hundred and twenty seconds Bama would reconquer their thirteen  point lead, and head to the locker room retaining a ten point advantage 36-26.

In the first four minutes of the second half UVA would get as close as six at 40-34. Alabama although would take the Cavs for a trip on the ‘merry-go-round’ throughout the rest of the quarter going back up by eleven, the allowing their lead to slip back to six, then back out to eleven before the final third quarter buzzer rang showing the Tide as a 52-42 leader.

In the final period the Crimson Tide showed no mercy extending their lead to sixteen a minute and a half into the quarter 58-42.

Down the stretch Virginia would get it back to ten 62-52 with just three and half minutes left in the game. Although with 2:49 left in the quarter Bama took a 64-52 lead and would see the very same score as the final, neither team scoring in the last one-hundred and sixty nine ticks.

This win improves the Crimson Tide to 8-4 on the season. This victory also marks Alabama’s first neutral site win of the season, and gets their winning streak out to three.

The Tide will take on Miami Friday afternoon in the second round of the Florida Sunshine Classic. 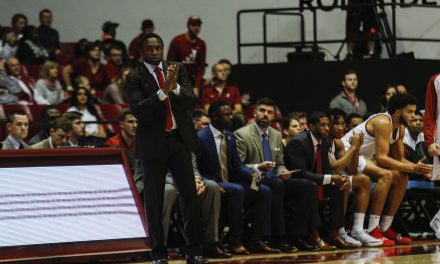