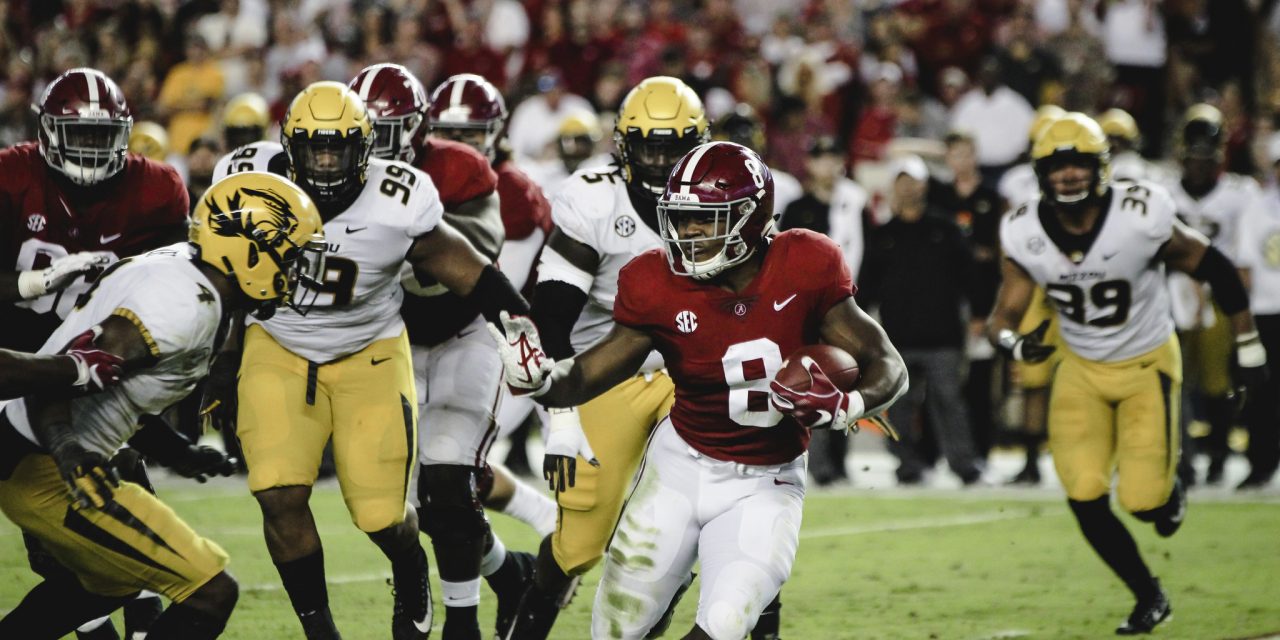 When it comes to Alabama Football, there’s always the usual suspects. Everyone knows about Tua Tagovailoa, Damien Harris, Jerry Jeudy, etc. But what about an “X” factor?

It seems that every great Tide football team has one. In 2009, it was Dont’a Hightower, in 2011 it was Eddie Lacy, and in 2015 it was Jalen Hurts. This years team has been one of the most dominant of all time for Alabama, starting off 7-0 (4-0) while averaging just over 53.5 ppg (points per game) and only allowing an average of 15 ppg. But, could this team still have a couple of tricks up their sleeve? The answer is yes, and his name is Josh Jacobs.

Josh Jacobs is a sophomore out of Tulsa, OK. He attended McClain High School, stands at 5’10” and weighs 216 pounds. In his senior season at McClain, Jacobs rushed for 2704 yards on 179 rushes and an extraordinary 31 touchdowns. He was highly recruited out of high school, receiving offers from schools such as Oklahoma, TCU, Texas, and obviously Alabama. He then committed and enrolled at Alabama in June of 2016, and it’s been history ever since.

In his freshman season, Jacobs made an instant impact and finished with 564 rush yards on 86 carries and 4 touchdowns. Although with the emergence of other running backs such as Najee Harris and Damien Harris, Jacobs’ stats have gone down. In his sophomore season he only totaled 284 rush yards, 46 carries, and 1 touchdown. This season Jacobs has not let last season’s stats get the best of him. He has already almost matched his carries from last season with 43, and has 199 rushing yards as well. He has made more of a scoring impact this season though, with 6 touchdowns already this season. He has also proven himself as a versatile weapon on special teams. Jacobs has 6 returns for 220 yards and a touchdown on a 77 yard return in the season opener against Louisville.

So as they say “numbers don’t lie”, although Jacobs is not seen as the premier back at Alabama he has proven his worth to this team. He is a versatile offensive weapon who can move the chains consistently, catch the ball coming out of the backfield, and provide explosive plays on special teams. He also has so many tools within his arsenal. He can turn on the jets to leave defenders in the dust, lower his head and run over anyone, and even show his elusiveness by juking out the defense. So next time you’re talking about this Alabama football team and their offensive explosiveness, don’t forget to bring up Josh Jacobs.