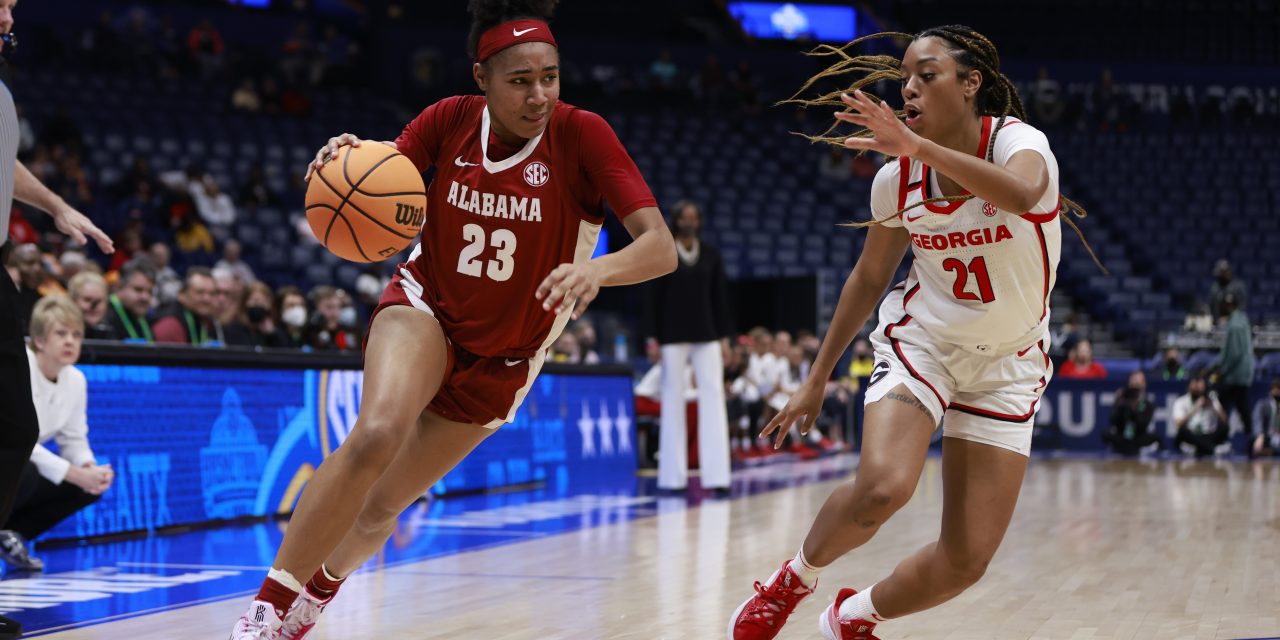 NASHVILLE, Tenn. — Alabama’s star duo lit up the floor on Thursday night, combining for 50 points to upset No. 24 Georgia in the second round of the SEC Tournament, 74-62.

Brittany Davis had 26 points, five rebounds and five steals. She went 5-6 on the night from three.

The Bulldogs also couldn’t stop Megan Abrams, who pestered Georgia’s interior defense all night. She scored 24 points, including nine at the charity stripe, in addition to grabbing seven rebounds for the Tide.

Allie Craig Cruce once again came through for Alabama, knocking down a pair of threes while grabbing six rebounds. She finished with 10 points.

Cruce takes it to the bucket!

Coach Curry called her number and she’s responded. Started both games in Nashville, and she’s had 24 points combined.

She was averaging 1.7 ppg coming in. Yes, just over ONE POINT. Unreal.@wvuafmsports

Alabama’s defense played a large part in their win, as they forced the Bulldogs into 18 turnovers that they would convert into 23 points.

“We were trying to limit looks in the paint… We kept changing our defenses after timeouts and dead-balls. We tried to keep them a little out of rhythm, because Que is so good with the ball in her hands,” said Head Coach Curry when asked about their defense plan heading into the game.

Georgia’s Que Morrison put up 18 points, but did so shooting just 6-16 from the floor.

Center Jenna Staiti played well, scoring 14 points on 5-7 shooting, but only played 22 minutes. She was often forced off the court due to Alabama’s decision to run a small ball lineup for the majority of the game.

Things looked great for the Bulldogs off the opening tip.

Despite making the second-least threes in the SEC, Georgia came out of the game firing as they knocked down two to jump out to an early 6-0 lead.

It didn’t last long however, as Davis would start to wreak havoc on the court.

She’d score 13 points throughout the rest of the quarter while coming up with three steals to give the Tide an eight-point lead heading into the second.

That’s when Abrams came in. The senior guard made her presence felt in the paint, scoring nine points on tough drives to the basket.

Alabama would get a pair of threes from Davis and Cruce, while their defense generated a number of turnovers that led to 16 free points for the Crimson Tide.

They led by 15 heading into the locker room.

Alabama has 16 points off of forced turnovers. The Tide's defense has the Bulldogs in a cage.

Davis and Abrams have combined for 27 points, while Sutton has added seven off the bench.@wvuafmsports

Alabama refused to let their guard down coming out of halftime, as their minds drifted back to their previous loss to Georgia where they collapsed in the second half.

“You could hear our kids talking going down the hallway at halftime,” said Coach Curry.

Just about every time the Bulldogs knocked down a shot, Alabama matched it with one of their own.

Davis went silent in the third, but Abrams would take over the scoring with 10 points in the quarter.

Cruce also stepped up and contributed five points for the Tide, including a second chance three off her own rebound to lead off the quarter for Alabama.

Davis would reignite in the fourth, scoring 10 points that included this step-back triple.

The Tide are near-impossible to stop when she’s doing things like that.

Alabama would coast the rest of the way to a twelve-point victory. The win marks Head Coach Kristy Curry’s 150th win in her time at the university.

”I hope we can get a lot more, first of all. Secondly, it’s just a credit to everyone around the program… I’m just happy to be a small part,” said Curry.

Alabama now advances to the quarterfinals of the SEC Tournament, where they’ll face No. 18 Tennessee. Tip is set for 8:30 p.m. CT and the game will be broadcast on the SEC Network.

Women's tennis returns to action in the Wildcat Duals

What to watch: Alabama Athletics March 7-13