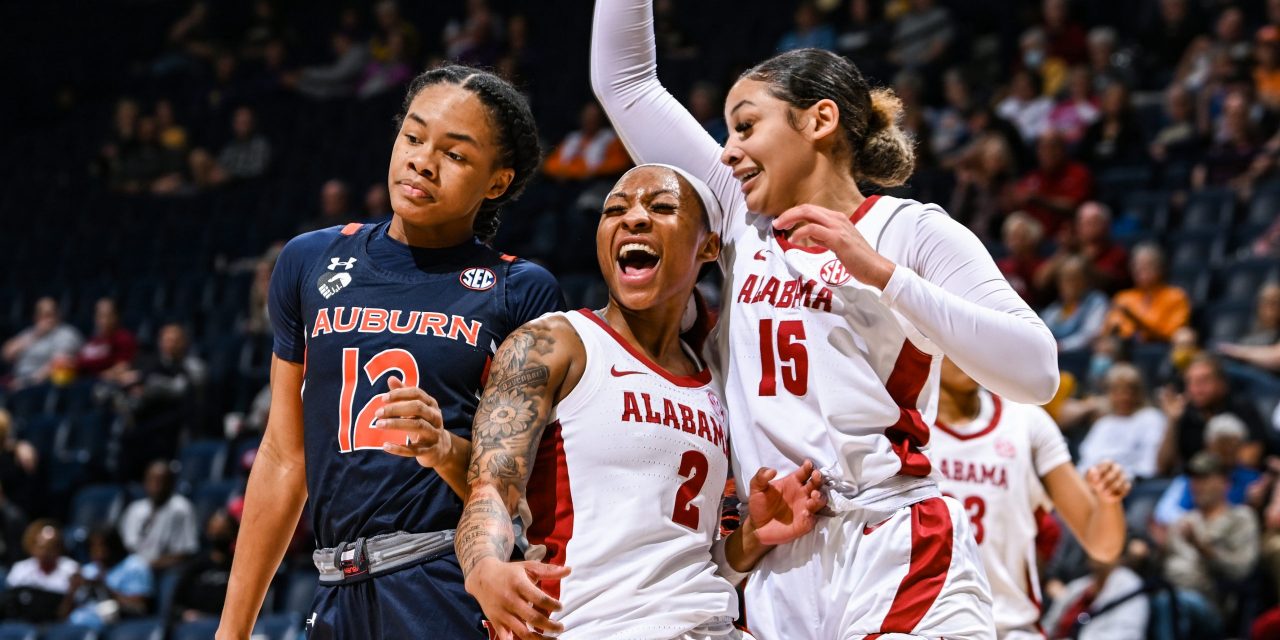 NASHVILLE, Tenn. — It took a true team effort from Alabama to defeat Auburn in the first round of the SEC Tournament on Wednesday, 75-68.

Four of the Tide’s starters finished the game in double digits.

The Tide show some serious grit, overcoming a third quarter where they hit just four shots to win the game by seven.

Megan Abrams looked like herself again, scoring 25 points and adding 5 assists. She attacked the Tigers’ paint defense throughout the game, getting to the line to make nine free throws.

Auburn keyed in on Brittany Davis all throughout the game, but she was still able to contribute, scoring 15 points while grabbing 11 rebounds.

JaMya Mingo-Young was arguably the reason why the Tide won such a gritty game. She scored 14 points while grabbing 15 rebounds and fighting for four steals. Her intensity was unmatched by any player, despite playing the entire game.

But the biggest surprise of the night came from Allie Craig Cruce. She’s averaged just 1.7 points per game this season, but put up 14 points on 5-8 shooting.

You're kidding! A THIRD three on the day.@wvuafmsports

The Tide overcame a mountain of obstacles to win the game.

Over the course of the game, they committed a total of 22 fouls in addition to 22 turnovers.

All night, the Tide dealt with foul trouble. Mainstay guard Hannah Barber was forced to sit much of the first half, as she picked up two fouls early.

Barber and Cruce played much of the fourth with four fouls, while Jada Rice fouled out late in the game.

In the third quarter, Alabama went a period of just over six minutes without scoring, while Auburn went on their own 10-0 run. It was eventually stopped as Hannah Barber made an acrobatic layup to break the lull.

Coming up on five minutes without a bucket here for Alabama. @wvuafmsports

Late buckets by Mingo-Young and Davis turned the game into a free throw contest down the stretch. The Tide went 5-for-6 from the line to close the game out.

Wednesday’s win over Auburn completes the season sweep for Alabama against their rivals. The Tide have now won the last seven matchups.

Auburn’s Honesty Scott-Grayson led the team in scoring with 13 points on 5-11 shooting.

Aicha Coulibaly couldn’t get her shot to fall, as she finished with 10 points on just 4-14 shooting.

The Tide will have less than 24 hours to prepare for their next game of the tournament.

”We’ll enjoy this. I told them when they quit eating dinner [and] put their fork down it’s all Georgia,” said Coach Curry.

The Alabama Crimson Tide (11-seed) will take on the Georgia Bulldogs (6-seed) on Thursday in the second round of the SEC Tournament. Tipoff time is TBA.

Alabama looks to rebound against Washington and Georgia