The Louisiana State University Women’s Soccer team sat at the bottom of the SEC West leaderboard prior to facing the Crimson Tide. This has not changed. The LSU Tigers have a record of 0-3-2.

This game marked LSU’s only second home game and sent the Crimson Tide back on the road after a brief stint in Tuscaloosa.

The Crimson Tide opened scoring early, with sophomore midfielder Carly Wyatt netting her first goal in the 19th minute and another goal in the 20th minute.

Coming out of the weather delay, LSU’s Tinaya Alexander secured the Tigers’ first goal in the 25th minute. The first half concluded with the Crimson Tide up 2-1. The Tide’s sophomore midfielder, Serena Pham, opened the scoring back up in the 57th minute and put the Tide up 3-1. LSU answered in the 58th minute again with Tinaya Alexander. Molly Thompson scored the equalizing goal for LSU in the 76th minute.

The Tide is now 1-3-2 as they look towards Friday evening, Oct. 30 and the Texas A&M Aggies. The game will kick off at 7 p.m. CST in Tuscaloosa.

The Tide Earn Bragging Rights for the Next Year 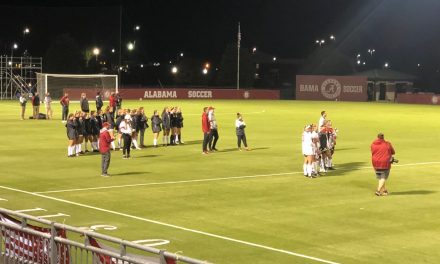