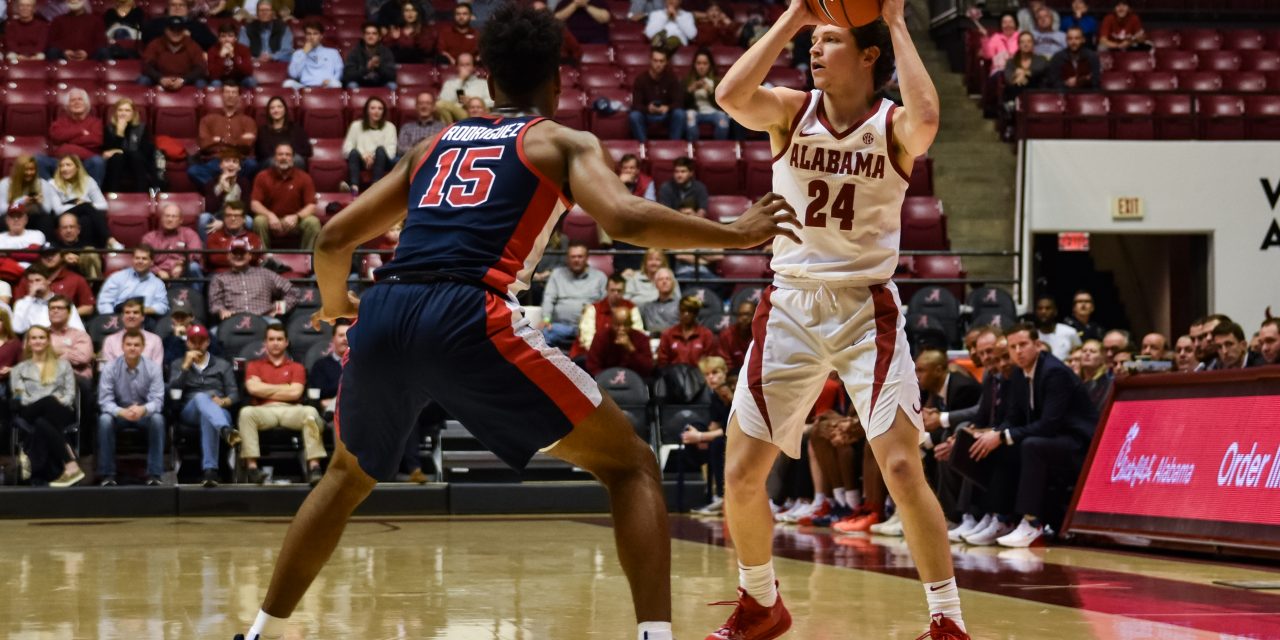 Tuscaloosa, Ala. –  The Alabama basketball team followed up their respectable three-point loss against No. 1 Tennessee with an actual win against No. 20 Ole Miss.

The Crimson Tide never looked back after only being down 7-6 with 17:32 remaining. John Petty’s early turnaround jump shot and 3-pointer off the bench made it a 17-9 lead for the Tide. His 15 points would lead Bama after a career-high 30 against Tennessee on Saturday.

Things would only get better towards the end of the half. In the final 5:58 Dazon Ingram and Riley Norris would both hit 3-pointers to compliment the aggressive slashing of Herb Jones and Kira Lewis. Galin Smith’s putback layup at the buzzer made it 42-26 at the half.

Alabama was able to defy any questions of inconsistency with a 32-27 second half that featured as much as a 28-point lead with 8:25 remaining.

“Tonight we were just a consistent basketball team, “Alabama coach Avery Johnson said. “There’s no magic formula. The players didn’t grow. Their hands didn’t get bigger. But we had an attitude that we refused to lose.

Petty’s 6-10 shooting (3-6 from three) pushed his percentage from beyond the arc at 38 percent on the season.

Donta Hall continues to be Bama’s most consistent player with a typical 11 point, 10 rebound, and three block night.

The Tide won the steals battle at 9-1 along with a 44-32 advantage in rebounds. Alabama actually lost the shooting battle at only 39 percent compared to Ole Miss’ 40 percent.

Bama’s most surprising statistic, however, was a 17-22 (77percent) night at the free throw line. This comes after the 8-18 (44 percent) charity stripe performance against Tennessee in what has been a 68 percent season good for 11th in the SEC.

Alabama hopes to build off the win on Saturday on the road against Baylor at 11 a.m. CST.

Alabama still knows how to grind out the clock