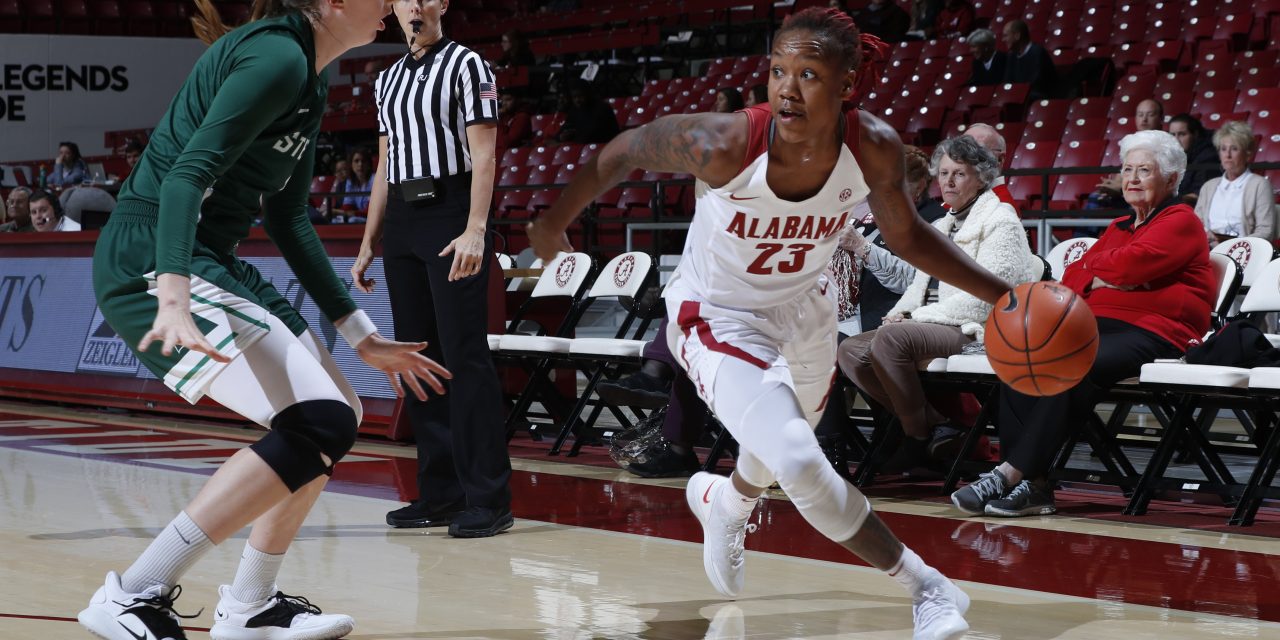 Tuscaloosa, Ala.- The winless Stetson University Hatters came to Tuscaloosa on Tuesday night to take on the red-hot Alabama Crimson Tide who was in search of their fourth consecutive win.

Although they began the day 0-5, Stetson had held their last two opponents to just 55 points per game. On the other side of the court they were averaging a mere 47 ppg, the main reason they had yet to celebrate their first victory of the season.

This early season slump for the Hatters comes with much parody to their historical success. They have qualified for some form of a postseason tournament whether that be the WBI, NIT or NCAA Tournament each of their past eight seasons.

Alabama on the other hand, has had quite the contradictory season to this point, winning four of their first five and three in a row. In their last time out standout forwards Jasmine Walker and Aniyah Copeland each posted their career highs for the Tide with 24 and 18.

The two schools had never met before Tuesday evenings matchup, but head Coach Kristy Curry was no stranger to the talent her team would see. “They are very talented, by January I expect them to compete for their league.”

The first quarter flew by only taking a total of seventeen minutes. The Crimson Tide found out quickly that Stetson had confidence in taking the three point shot, luckily for Bama the Hatters only hit two of their eight attempted in the first period. Both teams had a bit of a slow start offensively, but Alabama would go a late 8-2 run to take a nine point 18-9 lead at the first break.

Neither team allowed a single foul during the first period, and only a combined four turnovers, the Crimson Tide responsible for three.

In the second quarter Alabama continued their run, stretching their lead out to 24-14 within the first three minutes. The Hatters relied on their bench for nine of their fourteen total points.

The two teams would trade baskets down the stretch in the second quarter, but the Tide would gain their biggest lead of the game with twenty-nine seconds to go before halftime at 30-18 after a Shaquera Wade three pointer. The score would stand as the final buzzer sounded in the second period.

In the first half Stetson only made a quarter of their three point shots, and would need a much better effort in the last twenty minutes if they had any chance of breaking their seven game losing streak, dating back to last season.

To begin the second half Alabama would run into a bit of trouble although, allowing an 8-0 in the first four minutes, without scoring a single point of their own. They Tide would not hit the bottom of the net for the first time in the second half until the 5:30 mark but still held on to a 33-26 lead.

Bama turned the basketball over six times in the first five minutes of the third quarter, allowing the Hatters to pull the lead within four points multiple times, but three 3s in just as many possessions got the Crimson Tide lead back out to eight with three minutes to go in the period.

In their next minute of play Alabama would turn their ‘hot hand’ into a 7-0 run, matching their biggest lead of the game at twelve points 43-31.

The Tide would steady this lead and take a 46-34 advantage into the final quarter, finding themselves only ten minutes away from their fourth straight win. Through three periods only nine of the twenty seven total made shots for both teams were not by way of the three pointer.

In the final period UA got out to a fifteen point lead early, after an Allie Craig Cruce three point bucket, followed up by a De’Sha Benjamin mid-range jumper.

With four minutes to go in the game Stetson brought the lead back to single digits trailing 53-45. That’s the closest they would get though as Alabama would go on to secure a 59-47 victory, winning their fourth in a row, while also staying unbeaten in Coleman Coliseum.

Stetson is dealt their eighth consecutive loss. They put up sixty-two shots, but only hit nineteen of them (31%) a key to the Bama win.

The Crimson Tide will head back out west, this time to Tempe, Arizona to take on the Tulsa Golden Hurricanes this Saturday in the first round of the Arizona State Classic. They will then face the winner of Arizona State/Louisiana Tech the day after to finish up the tournament before they return home to face off against South Alabama in the annual 5th Grade Fastbreak game.