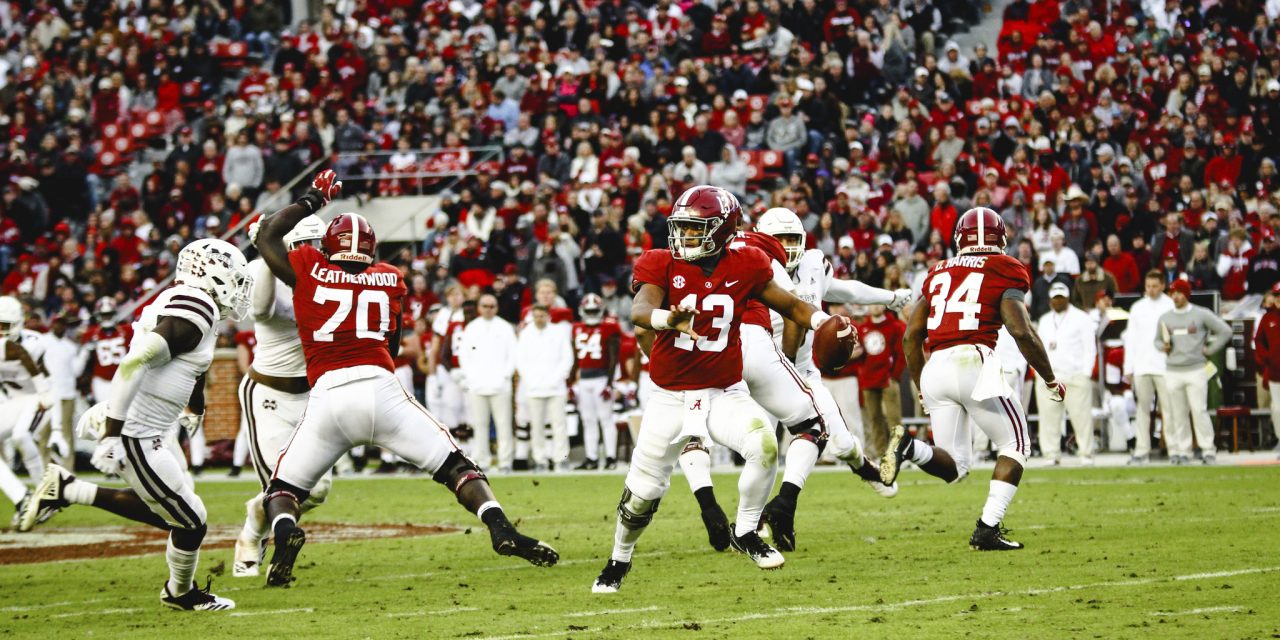 Everyone in Tuscaloosa can vividly recite to you what happened the last time these two teams matched up. “It’s second and twenty-six, shotgun formation and Tagovailoa takes the snap. He drops back looking right, he looks back to his left fires a deep ball and he’s got a receiver open. TOUCHDOWN! THE TIDE WIN THE NATIONAL CHAMPIONSHIP!” Then the confetti rained down and a star was born.

This year the #1 Alabama Crimson Tide (12-0) will take on the #4 Georgia Bulldogs in a renewed rivalry game in the SEC Championship. This game will even take place in the very same building the Tide won it all in Atlanta, Georgia in the Mercedes Benz Stadium.

The SEC Championship game was started in 1992 and with this year’s game the Crimson Tide will tie Florida’s record for appearances with its’ 12th. Also, with a win for the Tide they will hold the record for most SEC Championships won with eight.

The Tide come into this game as the favorites to win it all coming off the heals of one of the most dominant college football seasons to date. The Tide are second in the FBS in scoring with 49.0 pug and have been called the most explosive offense in the nation. With weapons such as WR Jerry Jeudy who has 56 receptions for 1079 yards and 11 touchdowns, to the elder statesman for the Tide, Damien Harris who has 117 carries for 719 yards and 7 touchdowns, to the “X factor” Josh Jacobs who has 412 rush yards, 171 receiving yards, and 12 total touchdowns this offense can attack you in many different ways. Led by Heisman frontrunner Tua Tagovailoa (70.9% comp., 3189 yds, 36 tds, 2 ints), the sophomore phenom is looking to capture his second National Championship in two years. As for Nick Saban, he is seeking his 6th SEC Championship on the road to his 7th National Championship.

On the back end, if you’re the Bulldogs you have to deal with one of the stingiest defenses in the country right now. Only allowing 13.8 ppg and being the 4th in the rankings for defensive touchdowns, this Tide D is one of the toughest Alabama has ever had. This combined with the star power of players like Quinnen Williams (7 sacks, 58 TOT), Dylan Moses (61 TOT, 3.5 sacks), and Mack Wilson (57 TOT, 2 ints) Kirby Smart and his offense are going to have their hands full.

Yet, to their credit the Bulldogs have had a pretty good season. Other than a tough loss at the hands of the LSU Tigers, Georgia has shown they can hang. Led by sophomore QB Jake Fromm (69.1% comp., 2236 yds, 24 tds, 5 ints), and coached by Kirby Smart who’s looking for his second SEC Championship. One thing the Bulldogs have going for them is their two explosive runnings backs in the backfield. D’Andre Swift (139 car, 962 yds, 9 tds) and Elijah Holyfield (133 car, 896 yds, 7 tds) have been problematic for some defenses this season.

This game is very important for both teams. It has major College Football Playoff implications, being that, the winner is virtually guaranteed a playoff bid.

The game is Saturday December 1 at 3 PM CT on CBS. Alabama is a 13 point favorite so far. So pull up a chair, sit back with some popcorn, because we might have another instant classic on our hands.