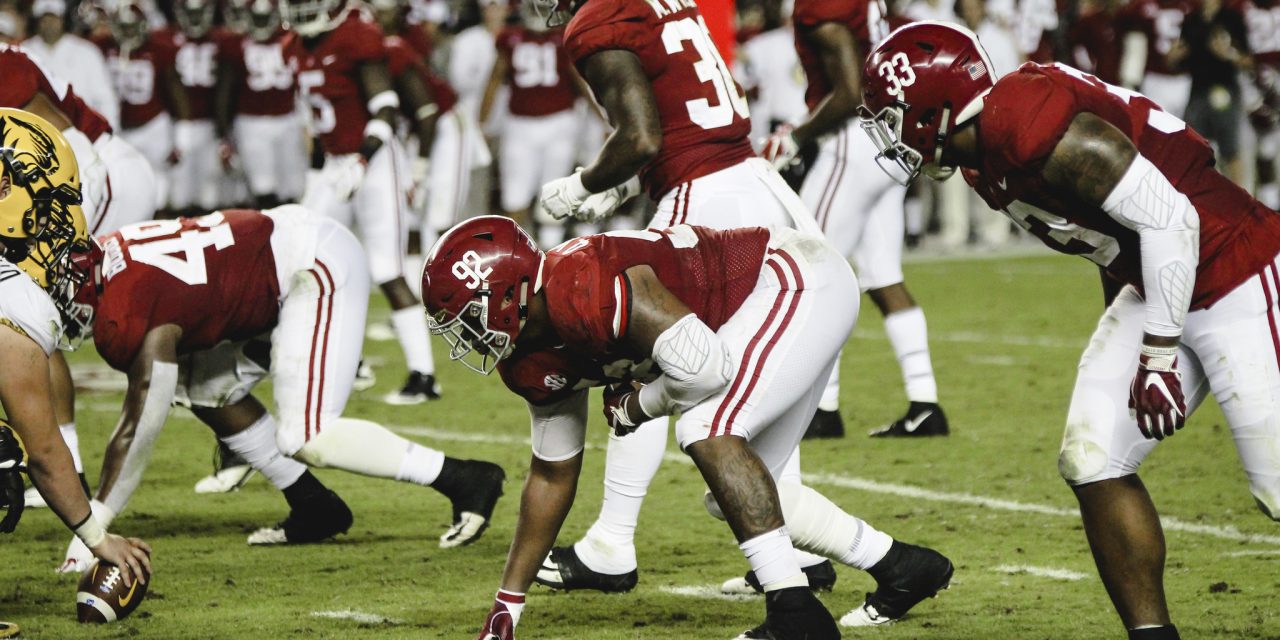 In this day and age, college football has evolved into an offensive minded game. In the NCAA there are countless teams who average over 40 points per game, and week after week the scoring totals continue to rise. The term “shootout” is used constantly within the CFB world, but what about the word “shutout”? For years and years we’ve heard the famous line “defense wins championships” and Nick Saban for years had proven this statement true. But the true question is, could the 2018-19 Crimson Tide defense be top five all-time? Yes.

Let’s take a trip down memory lane and think about some of the greatest defenses in all of college football. First, the 1986 Miami Hurricanes who defensively only allowed just over 12 ppg. and were known as one of the fastest, most violent defenses to play the game. Next, USC in 2008 who averaged 9 ppg. with three shutouts and had a future NFL star-studded lineup with Rey Maualuga, Brian Cushing, and Clay Matthews. Continuing with Washington in 1991 averaging just under 12 ppg. and virtually shutout Heisman winner Desmond Howard. Then Alabama in 1992 with one of the most dominant front lines in CFB history, three shutouts and just over 10 ppg. To wrap it all up with maybe the greatest defense of all time, Alabama in 1979 who forced five shutouts and only allowing two teams to score in double figures.

So, as they say number’s don’t lie. By the numbers, this year’s Tide defense compares very favorably to some of the greatest to play the game.

Let’s run down some of the numbers for the Tide this year.

To start off, the Tide is only allowing 12.7 ppg this season. Along with back-to-back shutouts against two AP ranked top 25 teams, this is the first time in the history of college football that has ever been done.

Next, the Tide are only allowing barely over three yards per rushing attempt and only three rushing touchdowns on the entire season. The Tide D has also forced 19 turnovers, four of them resulting in defensive touchdowns.

Also, the dominance of the front seven has been felt as the Tide have recorded 36 sacks on the season. Capping it all off with a 64% defensive red-zone efficiency, the Tide have one of the stingiest defenses out there.

Lastly, some of the greatest defenses have all been star-studded with future NFL players. This Tide D doesn’t lack any star power by any means. It all begins up front with defensive lineman like Quinnen Williams (49 TOT, 5 Sacks), Isiah Buggs (33 TOT, 9.5 Sacks, 2 FF), and Anfernee Jennings (19 TOT, 3.5 Sacks, 6 PD) who control the line of scrimmage and wreak havoc in the backfield.

Then you move to the facilitators of the defense with standout linebackers such as Dylan Moses (54 TOT, 3.5 Sacks) and Mack Wilson (43 TOT, 2 INT) who are so athletic and run all over the field.

Finally with the last line of defense in the secondary with ball-hawking defenders like Deonte Thompson (50 TOT, 2 INT), Xavier Mckinney (46 TOT, 2 INT), and Saivion Smith (31 TOT, 3 INT) who can lock down any receivers out there.

This Tide D usually gets over-shadowed by how amazing the offense has performed thus far, but don’t let them fool you, they can hang with the best of them and maybe could hang with some of the best to ever do it.