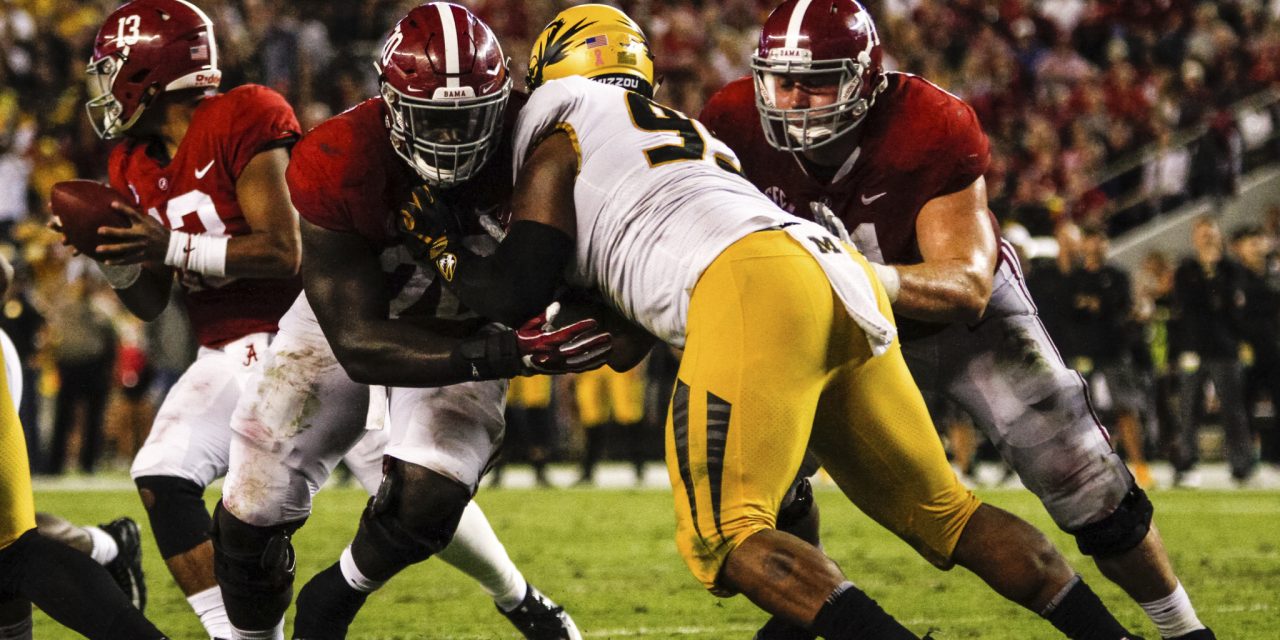 On the second play of the first drive Heisman front-runner Tua Tagovailoa hits Jerry Jeudy for an 81-yard touchdown, Tagovailoa’s longest pass so far this season. This lead would grow and stay in the Tide’s favor for the remainder of the game.

Tagovailoa also committed his first turnover on the year. While still clean with 0 interceptions, he lost a fumble early in the first quarter. The Tigers were able to capitalize on the sophomores clumsiness and land a 43-yard field goal.

Entering this game, many Tide fans had concerns on the defensive side of the ball. After giving up 31 points to a questionable Arkansas team many people began to question if Defensive Coordinator Tosh Lupoi had control over his defense. Saturday night against Missouri did not calm the nervous masses. While the Tiger running backs were held to only 70 yards, it seemed as though they all came from long plays where they were able to break through Alabama’s front line; a concern the Tide has had since Texas A&M quarterback Kellen Mind was able to rush for almost 100 yards with ease.

The Crimson Tide front line did not let Drew Lock run freely. Lock was sacked a total of 4 times, One of which was a strip sack early in the first quarter credited to Isaiah Buggs with the fumble recovery by Anfernee Jennings. Alabama was able to capitalize on that performance of defensive strength with Tagovailoa finding Devonta Smith in the end zone for a 13-yard touchdown pass. Another sack, as time expired in the third quarter, credited to Quinnen Williams brought Lock back into his own end zone resulting in a safety.

A secondary lacking Trevon Diggs held the Missouri passing game to 142 yards and a lone touchdown caught by Jalen Knox in the first quarter. Junior Saivion Smith nearly had a pick-six early in the first quarter after intercepting Drew Locks first pass attempt on the night and returning it 33 yards. It is also worth noting that this Alabama secondary held all of the Tiger’s wide receivers except for Jalen Knox, 61, under 45 yards.

Alabama Quarterback Tua Tagovailoa entered Saturday night’s SEC matchup with a right knee sprain that did not limit him during practices. In the third quarter Tagovailoa held onto the ball in an attempt to rush for a first down. As he slid close to the line-to-gain he rolled over grabbing his right knee. He was able to get up and jog to the sideline on his own power. He was attended to in the private medical tent on the Alabama sideline and returned minutes later.

After the game Head Coach Nick Saban stated: “Tua could have gone back in the game.” However, he stayed on the sideline as junior Quarterback Jalen Hurts took the remainder of the snaps and helped the Crimson Tide close out the victory over Missouri 39-10.