The Crimson Tide Rally to Win in the 11th Inning 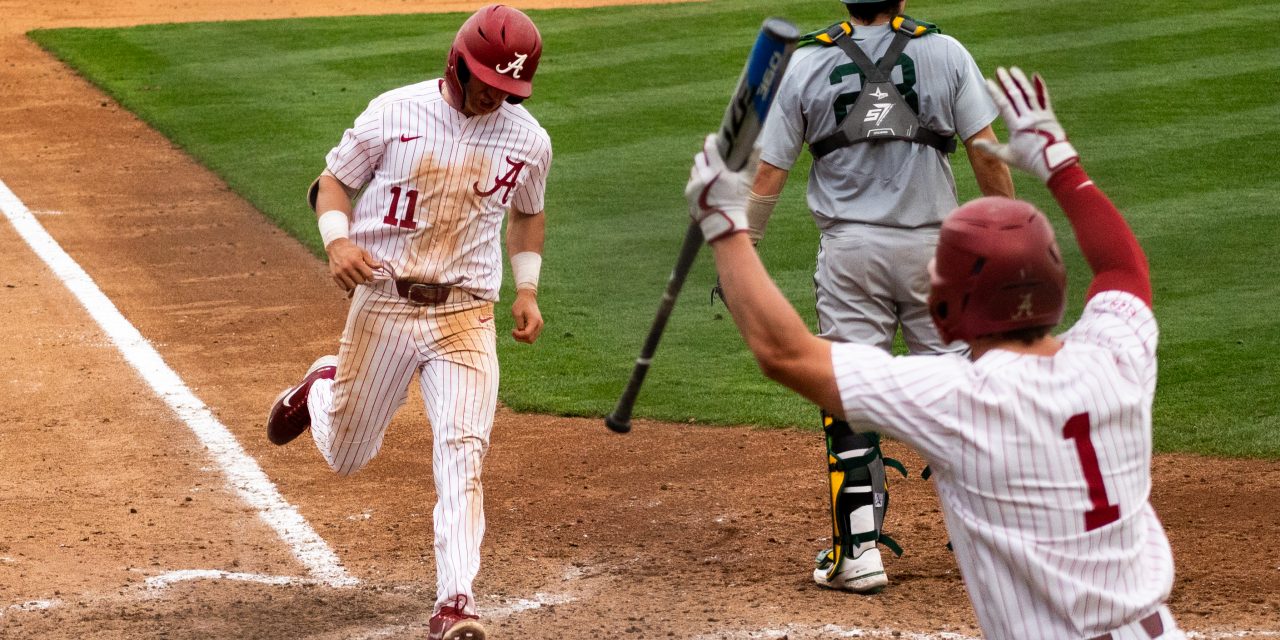 TUSCALOOSA, AL – The Alabama Crimson Tide took on Wright State in the first game of a
double header with the Raiders on Saturday. Early on the Crimson Tide jumped out to a 4-0 lead
in the third off the bat of William Hamiter who singled to drive in two runs adding to the two-run
lead that the Tide already had. In the fourth Wright State would respond with three runs off a
litany of errors by the Crimson Tide.

Wright State then tied the game in the 5th with a sacrifice fly from third baseman Tyler Black.
The Crimson Tide would take their starter Antoine Jean out after 4.2 innings pitched 4 runs, 4
hits, and 5 strikeouts. The Tide would bring in Jacob McNairy who gave the Crimson Tide a
solid showing for 4.6 innings. He would give up a run in the 5th inning which gave the lead to the
Raiders.

The Crimson Tide would tie the game in the bottom of the 5th inning on a wild pitch that allowed
Sam Praytor to score. With the game notched at 5-5, the Raiders would come out in the 7th inning
to increase their lead to 7-5 off the bat of designated hitter Zane Harris. Harris hit a two RBI
double to put the Crimson Tide down 2 runs.

The Crimson Tide and Peyton Wilson would not go quietly as Wilson hit a 2 RBI single in the
bottom of the 8th inning to tie the game at seven a piece. In the 9th McNairy strikes out Wright
State to head into the bottom of the 9th but the Tide were not able to score sending the game into
extra innings.

The 10th inning the Crimson Tide brought in Chase Lee to pitch who closed out the 10th inning
with three strikeouts and one man on base. The Tide would then be sat down by some great
pitching by Wright State pitcher Austin Cline. The game headed to the 11th inning and Lee
started off strong with two quick outs. Wright State’s Tyler Black would hit a single into center
field but a great throw by Andrew Pinckney to catch Black trying for extra bases. The Tide
would come up to bat in the 11th and got a single to start the inning by Drew Williamson. After
two Crimson Tide walks Hamiter came to the plate with the bases loaded. Hamiter would hit a
walk-off single to left field to score the winning run. The Crimson Tide would win the game 8-7
and take a 2-0 series lead heading into the second game of the double header.