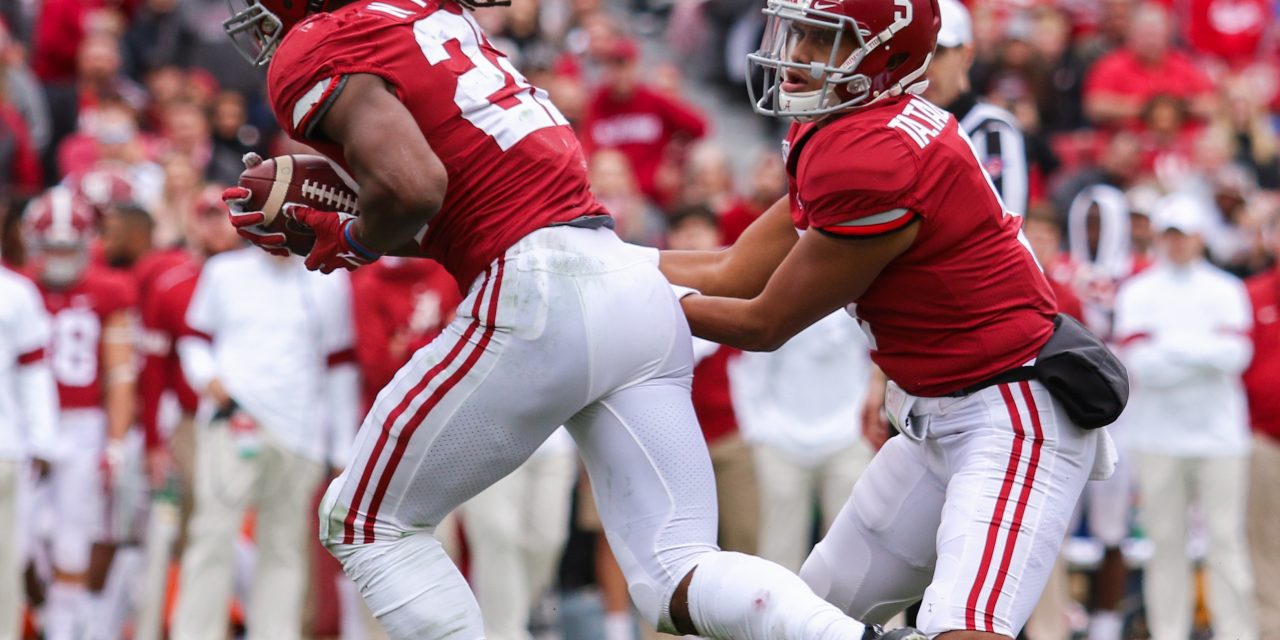 Yesterday, Matt Zenitz reported that Taulia Tagovailoa, the brother of Tua, had entered his name in the transfer portal, seeking an opportunity elsewhere after appearing in five games during his freshman season with the Crimson Tide.

He is currently considered a sit one, play three prospect, but with rule changes on the table and uncertainty stemming from the unprecedented sports hiatus there could be a change to the status of his recruitment.

There will no doubt be a long list of teams pursuing the young quarterback and he will be given a chance to compete at any school he chooses. As things stand, here is a list of the top contenders to land Taulia and the case for/against them:

Jaime Newman has arrived in Athens to play as a graduate transfer on a loaded Georgia team, behind him are junior Stetson Bennett and freshman Carson Beck. The Bulldogs have already picked up a commitment from 2021 5-star prospect Brock Vandagriff.

Kirby Smart and his staff love quarterback competitions and adding Tagovailoa to sit on the sideline and learn the system during the 2020 season would give them an option with more experience to battle with Vandagriff for the starting job in 2021.

The Consensus: Vandagriff presents a threat and Smart has shown a willingness to run with a freshman quarterback, but even some of the nations top talents need time to develop, providing Tagovailoa with a chance to prove himself.

Jarrett Guarantano is playing his last season with the Volunteers as a redshirt senior, he already finds himself in a quarterback battle with sophomore Brian Maurer and freshman Harrison Bailey. With the impact of COVID-19 on season preparations, Bailey will likely need another season to win the starting job and that would present Tagovailoa with an opportunity to compete.

Coach Jeremy Pruitt has a connection with the family from his time in Tuscaloosa and pushed hard to get Taulia to break out of his brother’s footsteps and flip his commitment to Tennessee. With a second shot, it will be interesting to see whether Pruitt is still keen on the young quarterback’s potential.

The Consensus: There is a lot of competition to get through but the rumors of a potential flip during his recruitment suggest a strong relationship that could lead to a leap of faith.

Florida State’s current quarterback situation is complicated by the COVID-19 restrictions, it seemed for a while that the young guns would be given every opportunity to earn the job but a lack of practice snaps could save James Blackman his job. With one more year of eligibility Blackman will look to hold onto his job while freshmen Tate Rodemaker and Chubba Purdy, brother of Iowa State starter Brock Purdy, compete to steal snaps.

Florida State has a new head coach who is looking to make wholesale changes to the offense. Mike Norvell and his offensive coordinator could use a spark to get things going in Tallahassee. While it does not check the “proximity” box as well as the South Florida schools, it is an in-state alternative that unites him with a familiar face, new offensive coordinator Kenny Dillingham. Dillingham scouted and helped lead the recruiting effort at Auburn in his brief stint with the Tigers.

The Consensus: The Norvell/Dillingham duo presents a unique opportunity for Tagovailoa to be a part of an explosive offense but provides risk with a full quarterback room and a coaching staff making its first attempt at the Power 5 level.

Josh Jackson held onto the job at Maryland with relative ease last season, but as a senior, his time is quickly coming to an end. The Terrapins provide Tagovailoa with a safer option that includes less perceived competition that the other potential destinations but that does not mean that the other quarterbacks on the roster are not capable of progressing and taking over as the top option quickly.

Mike Locksley can be added to a long list of former Nick Saban assistants that had contact with the Tagovailoa family over the past four or five years. He is building a team at Maryland that would provide Taulia the opportunity to compete against some of the best defenses in the country week after week.

The Consensus: Maryland presents a safe option where Tagovailoa can get advice from someone he trusts and get a great chance to take over the starting job for the next three seasons.

The Connection: Proximity to Tua and the rest of the Tagovailoa family

All three of these South Florida schools would certainly make room on the roster to accommodate Tagovailoa, but whether they present the right fit is a different question. It comes down in large part to Taulia’s belief in his ability to compete for, and win, a starting job at a top program or take a guaranteed job at a lower level school and hope the stats are enough to earn a spot at the next level.

Miami is in a slightly different category since they do have the prestige of being an ACC school, but they have invested in quarterbacks like N’Kosi Perry and Tate Martell for the 2021 job. If the Hurricanes had retained Dan Enos, who is also familiar with the Tagovailoa family, they would be a bigger player but as things stand Miami is a rebuilding program that has focused most of its attention on the defensive side.

The Consensus: While many fans are hoping that Taulia leaves the SEC and joins his brother in South Florida, none of these options quite line up with what other programs can offer