After a busy weekend in Tallahassee, Florida, in the Florida State Relays, the Alabama track and field team turns its attention to the upcoming Florida Relays. As it heads to Gainesville, Florida, the No. 16th ranked men’s team will look to build upon newfound energy.

Many from the Crimson Tide got the taste of success at the past relay, but none shined more than Kevin Shannon and Kord Ferguson. Both the  throwers set new personal bests in their  respective events Saturday.

“Technical changes in my form were key to my success at the Florida State meet this past weekend,” Shannon said.

Shannon, an Alabama native, placed fourth in the javelin event and firmly believes there is plenty of room for improvement and that the best is yet to come.

Despite his recent success, there is much more than what meets the eye. Shannon differs from his fellow javelin competitors, but what makes him interesting might be his unorthodox pre-meet rituals. While most competitors like to listen to music (preferably rock or rap) to get focused, the self-proclaimed nerd and Game of Thrones fans prefers something a  little different.

“Before every meet, I like to stay loose and relaxed, so I actually listen to some funk music,” Shannon said.

Although Shannon had a good meet, it might have been the freshman, Ferguson, who had the most  successful day.

“It was an honor to win that award, and hopefully it is only the beginning,” Ferguson said.

It is the first award of his career and most likely not his last. If Ferguson is looking to follow in the footsteps of his role model Al Oerter, he is off to a  good start.

“The adversity he [Oerter] overcame was the most impressive to me; he  competed and was successful in four  different Olympic games,” Ferguson said. “It speaks to the longevity of his career and how he was able to maintain his level of competitiveness.”

Ferguson has always been a student of the game, but when he is not preparing for his event, he is watching WWE. It’s not hard for him to get amped up for his events between the WWE  highlights and his love for  rock music.

“There may be several different personalities within the team, but we have always have had the same goal: win,” Shannon said.

Alabama’s offense made the plays when it mattered most 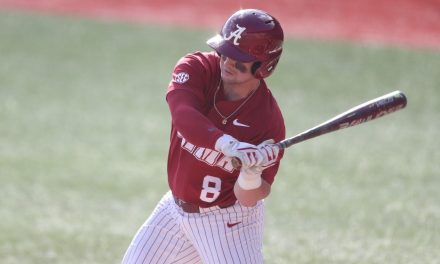