The Alabama Crimson Tide men’s tennis team lost a 6-1 match against the No. 29 Florida State Seminoles in Tallahassee, Florida on Friday. The loss drops the Crimson Tide to 5-2 on the year.

Florida State earned the doubles point by winning all three doubles matches against the Crimson Tide. Sophomore Korey Lovett then fell 6-1, 6-2 to give the Seminoles a 2-0 lead. Freshman Spencer Richey fell next, 6-0, 6-3. The win was clinched by Florida State with a 6-2, 6-1 loss by Alabama sophomore Grayson Goldin.

The remaining three matches were finished, and Alabama earned its only point when senior Becker O’Shaughnessey won a long, exhausting 4-6, 6-3, 11-9 match. Florida State earned its final two points with a 4-6, 6-3, 10-5 defeat of freshman Mazen Osama and a 7-5, 7-5 victory over sophomore Danny Kerznerman.

Though the result was not what the team wanted, there were still plenty of positives. O’Shaughnessey won his sixth straight singles match. Osama played a tough, close match against the No. 15 player in the country, after being named SEC Freshman of the Week earlier in the week.

Alabama is back in action on Friday, Feb. 5, when No. 2 Oklahoma comes to Tuscaloosa. 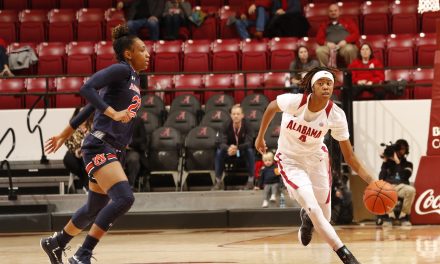