Everything seemed to be going wrong offensively for Alabama. Heading into the seventh inning the team had been held to just two hits and only three base runners overall.

The seventh and ninth inning provided all of the runs for the Crimson Tide, with three in the seventh and the most important run in the ninth.

The ninth started out with a single by Kyle Kaufman. Connor Wright would then pinch run for him. Wright would be moved to second on a sacrifice bunt by Cody Henry. This brought Hunter Alexander to the plate.

Alexander had only two hits in his last 16 at bats. He tried changing things up for luck, like adding batting gloves to no avail in previous games.

Alexander hit a single through the middle to drive in a runner and give Alabama a 4-3 win over Louisiana-Monroe.

“I knew it wasn’t hit extremely hard and I saw how far back the center fielder was playing,” Alexander said.

In the seventh, Kaufman once again started it off with a single up the middle, followed by a double off the bat of Henry. Alexander followed Henry and found a pitch he like and hit it to the right-center gap scoring the first two runs of the game.

He would later score on Connor Short’s double to tie the game. Short, who had also been struggling, finished 2-for-3.

Brock Love was the story line for Alabama’s pitching. He came in the fifth inning and had all his pitches working. He recorded 10 strikeouts out of his 13 outs he pitched, including six straight.

“My fastball [was] rotating,” Love said. “I was trying to be efficient. I was locating really well, and competing every hitter and every pitch.”

“It’s not how you start; it’s how you finish,” head coach Greg Goff said. “Adjusting to a new system takes time.”

Another streak was ended tonight with Cobie Vance going hitless for the first time this season. He finished 0-for-4 and he hit into a double play.

For Louisiana-Monroe, its runs came early in the game. It scored all three runs in the first two innings of the game. Designated hitter Blake Buckman finished with two of the three RBIs. He would finish 1-for-3.

The Warhawk starting pitcher Josh Leone was outstanding all the way till the seventh inning. He went 6.1 innings and allowed all three runs, all in the seventh. He managed five strikeouts and only one walk.

Alabama returns to action on Saturday when it plays ULM for game two in the series. Jake Walters starts for Alabama at 2 p.m. 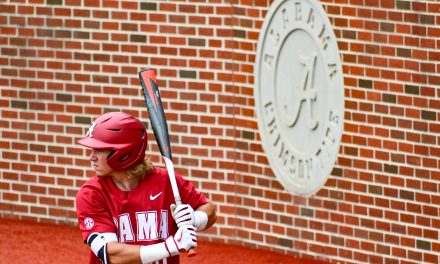