Jalen Hurts dropped back and was searching for a target, but the University of Alabama quarterback didn’t have a body downfield open enough to hit with a confident pass. So, he tucked the ball and took off on his own.

“He’s a great competitor,” coach Nick Saban said. “He never loses his point, but we need to do a better job of executing.”

That was the first time any player – Alabama or LSU – made it into the end zone Saturday at Tiger Stadium, and it was in the fourth quarter. The Crimson Tide added a 25-yard field goal before time expired to close out the night with a tight 10-0 victory over the Tigers.

Had it not been for Hurts, Saban isn’t sure his team would have pulled through with the win.

“He mad some errors early in the game that were costly, and he made some plays at the end that his athleticism allowed him to make,” Saban said. “I think as we grow with him, we’re going to have to live with both, and I like that second part more that the first.”

Just a true freshman, Hurts slid into ninth place on Alabama’s single-season scoring list as he is responsible for 22 touchdowns through nine games. He has thrown 12 and ran for 10.

Because of his youth, though, Hurts still makes mistakes.

During the Crimson Tide’s opening drive, Hurts threw an interception. Thankfully for him, the defense came out and forced LSU to go three-and-out. Alabama didn’t have to pay for Hurts’ slipup.

Through two quarters, Hurts completed 5 of 13 passes for 27 yards. He had a long shot of 21 yards. He also carried the ball five times for 42 yards, mainly due to a long 28-yard burst.

Then, the Crimson Tide went into halftime without any points to its name for the first time since 2007.

“This game is all about competitive character, perseverance, playing in a tough place to play and making the choice that you’re going to do everything you have to do as a competitive to have success,” Saban said.

Although the scoreboard remained blank during the third quarter, Alabama’s offense started clicking more. It consistently picked up first downs, more than doubling its numbers. It tallied just five first downs during the first half but added an additional 11 by end game. The same went with total offensive yards. Alabama finished with 323 yards after having gone into halftime with 120.

As for Hurts, he completed 10 of 19 passes for 107 yards overall. He topped his first-half deep ball with a 52-yarder and was sacked just once. The 6-foot-2, 209-pound fighter was also the Crimson Tide’s lead rusher. He totaled 114 yards on the ground over the course of 20 carries. His longest run was 28 yards.

Behind Hurts was Damien Harris, who totaled 53 yards on 12 carries. Fellow running back Bo Scarbrough had 52 yards on 11 carries.

Within the receiving core, ArDarius Stewart snagged three receptions for 55 yards. He was the recipient of Hurts’ 52-yard bomb. Fellow wide receiver Calvin Ridley had two receptions for 23 yards.

“I have to say, I’m awfully proud of the way our team competed in this game,” Saban said.

Alabama baseball seeks to even things up against UAB 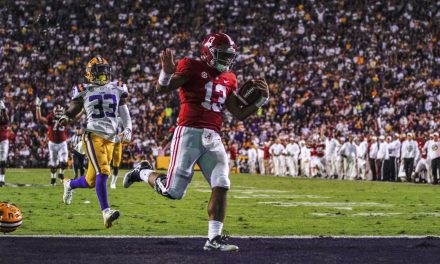