It’s been over two years since the Alabama gymnastics team last traveled to Gainesville, Florida, for a meet, but on Friday, the No. 5 Alabama Crimson Tide will once again return to Gator territory to take on No. 1 Florida.

Knowing it’ll being going up against the best doesn’t make Alabama nervous. Instead, it’s fueling the team.

“I like to think you can always ramp up for anyone, but I definitely think the level of competition we’re about to walk into creates an energy all week in your preparation that elevates everyone to their best – I hope so,” Alabama coach Dana Duckworth said.

Alabama is also using its 196.700-196.400 loss against Arkansas last week as a source of energy and determination this week.

Duckworth compared its loss to Alabama football’s loss against Ole Miss early on in its season. That loss didn’t stop the football team from going on and winning the NCAA Championship.

“If it was our Ole Miss and we use it to fuel us the right way, then we’ll become a much better team,” she said.

Just like football did against Louisiana-Monroe the following week, gymnastics is looking to beat Florida – the loss just being a stepping-stone in the overall process.

Duckworth said the gymnasts are doing three things to prepare for their upcoming meet: practicing, planning and rehearsing.

“I hope they’re as fired up as I am because to me, I love going to compete against the best because that’s when you become better,” she said.

Both teams have defended their home turf well. Dating back to 2001, whichever team hosted the meet, won the meet.

“As a team, we’re not even going to worry about it being that we’re in Gainesville against a really good team because we’re also a great team,” junior Aja Sims said. “So just take it one thing at a time and stay in the ‘Bama bubble, that’s what we’ll do.”

The only two gymnasts who have competed in Gainesville before are seniors Lauren Beers and Carley Sims. For everyone else, this will be a first and they’re excited.

Originally from Orlando, Florida, Aja Sims is also excited for another reason on top of being able to compete.

“I’m excited to go back home,” she said. “It’s my first time going home since I’ve been here, so I’m going to have a nice crowd.”

Aja Sims is happy she has a big crew coming to cheer her on and hopes Alabama fans will stand out in the midst of all the Gator fans.

Aja Sims and Duckworth both expect a big crowd and loud environment.

“We’re going to feed off their energy and make it ours,” Duckworth said.

The history between the two teams goes deeper than just Alabama having back-to-back wins at home over Florida.

In the past five years, the two teams have split the NCAA Championship title. Alabama took it first in 2011 and then again in 2012, but then Florida won its first title ever in 2013, only to become the three-time defending NCAA Champion after winning it again in 2014 and 2015.

While the Gators are no stranger to the Crimson Tide in post-season, right now, Alabama is taking it one meet at a time and this is just another regular-season meet against another highly ranked team.

“I look forward to going down to Gainesville with that kind of competition with a mission – it’s for Alabama to be the very best we can be,” Duckworth said. “We put four events together, we’ll let the outcome take care of itself.” 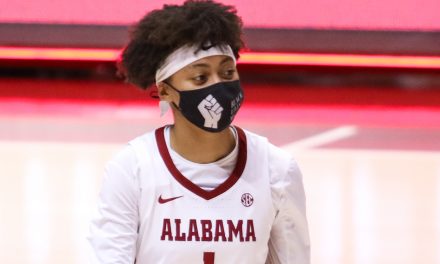 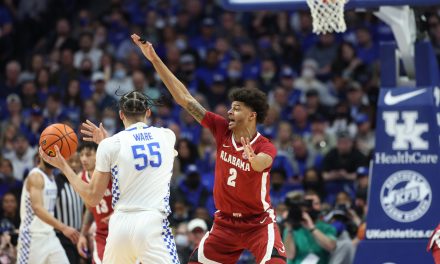 Alabama enters their final game of the season before heading to Tampa.