Alabama Women’s Basketball looks to bounce back against No. 16 Texas A&M

Alabama left Starkville, Mississippi with its first loss of 2018. The loss snapped the Crimson Tide’s three-game winning streak. Now, the team has its sights set on the No. 14 team in the country, Texas A&M.

“I’m just really happy and pleased with our team’s response to our game at Mississippi State,” head coach Kristy Curry said. “[There were] a lot of positives from that game regardless of the outcome of the score … I’ve loved how we’ve worked this week and our preparation for Texas A&M.”

The Crimson Tide stayed in the game against the then No. 4 Bulldogs thanks to a career game from senior guard Hannah Cook, who scored 25 points on 8-for-10 shooting, including making all five of her shots from three-point range.

After Alabama’s win over LSU, Cook said she had been struggling with her shot, but a hot second half against the Lady Tigers and the breakout in Starkville put those concerns to rest.

“I think I just needed to stop thinking about it so much,” Cook said. “Thinking about it really messed with my head a little bit, but a shooter’s just got to shoot, and that’s what I did.”

During the second half, Alabama suffered a different loss that could be more lasting than just losing the game. Fifth-year senior and the team’s “mother hen,” Ashley Williams, left the game on a stretcher after a collision with a Mississippi State player.

Williams was taken to the hospital for precautionary reasons, but returned to Tuscaloosa the same night. She is day-to-day, so her status for Thursday night’s game is unclear. All things considered, the team expressed they were thankful the injury was not as bad as it could have been.

Curry said Williams is still as active as ever in practice, challenging her teammates to elevate their games in case she is unable to play. The chief concern would be replacing her rebounding, as Williams leads the team with 6.7 per game, nearly two more than any other player.

Williams’ roommate, senior forward NeNe Bolton, added that Williams’ mind is still on basketball even when not near the court.

“She’s just been resting and taking it day by day,” Bolton said. “She talks about [the team] being able to step up since she’s not here, and she’s just still talking about basketball and what she needs everybody else to do.”

Looking ahead to Thursday night’s home game against No. 16 Texas A&M, Curry hailed Aggies guard Chennedy Carter, who ranks second in the SEC in both points per game and assists per game, and is a candidate for National Freshman of the Year. She also said six-foot-five center Khaalia Hillsman excels in the post and called junior guard Danni Williams a “special scorer and shooter.”

The Aggies’ starting lineup is so well-rounded that Curry couldn’t leave out the other two when asked about her team’s game plan.

“We’ve got to keep Anriel Howard [12.7 rebounds per game, second in the SEC] off the boards; there were 28 offensive boards that they got against Georgia on Sunday,” Curry said. “[Jasmine] Lumpkin … really does a great job with her mid-range game. So their first five is as good as any five in our league.”

With Alabama having risen to 64th in the latest Rating Percentage Index rankings, a win against a top-20 conference opponent could work wonders for the team’s chances at the Big Dance.

Curry, though, maintains that this game is no more important than any other.

“We know that Thursday night’s game is really important just because it’s the next game on our schedule,” Curry said. “I think it’s just another opportunity for us. We feel like we’ve got 16 pieces to our favorite pie, and they’re all just as important.” 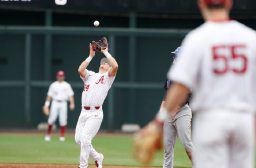