Keeping it simple: Sam Schilling keeps to his routine

Sam Schilling is not afraid to admit that he has worn the same pair of black and red sneakers for years, even though he has outgrown them.

Jack Safford, a former goalie for the Alabama Club Hockey team, believes hockey players, particularly goalies, tend to be superstitious, especially on game days. They stick to the same routines and rarely break away from them.

Schilling, a junior at Alabama double majoring in business and food and nutrition, has been wearing the same outfit for years.

Along with the Nike Free Run shoes that are black in the back, red in the front and have the Nike swoosh running through them, he likes to wear a plain, black Alabama T-shirt and grey Alabama hockey shorts as he warms up for a match.

“At this point, I feel like my routines and superstitions allow me to be the most successful on the ice,” he said. “I just think I do it because it works for me. They’ve been many seasons in the making.”

On Friday game days, the process of preparing for a big game usually starts the night before for Schilling.

“It starts Thursday night, I always have dinner with the girlfriend,” he said. “It’s pretty much a staple. Gnocchi, it’s an Italian [pasta] and spaghetti sauce.”

In the morning, Schilling will walk from his apartment on 13th Street and head towards the Starbucks by Tutwiler Hall on The University of Alabama campus.

“I order a ‘Grande’ coffee, that’s pretty much always been steady for the past two years,” Schilling said.

The rest of that Friday depends on the class schedule Schilling has, which varies semester-to-semester. This semester, he is taking three hours of classes on Fridays.

At 3:30, he, his room and teammate Charlie Corbett and club president Jon Lovorn head to Pelham, where the Alabama Club Hockey play its home games, at the Pelham Civic Center.

When he arrives at the ice rink, Schilling likes to go into isolation. As a goalie, he usually has different game preparation than a lot of his teammates.

Schilling then stretches with the trainer. Starting with head stretches, they work to the groin and then conclude with the hip. This goes on until 5:30.

For the next 15 minutes, Schilling goes to make sure his equipment is ready to go. He checks the chest protector, gets the leg pads ready, sharpens his skates and tapes his stick, with the help of equipment manager Laura Thonus.

He hands Thonus the same thing every week, for her to hold and then hand to him during breaks.

“He always gives me a hat that he wears on the bench” Thonus said. “It’s a black Alabama hat, the same hat he wears every single week.”

At 5:45, there is a team meeting that lasts five minutes before Schilling breaks away from the team, to calm his mind again.

He exits through the side door of the rink, and walks in a complete circle around the building in the mostly empty parking lot, from the back, making his way to the front.

“Wasting Gas” by Dallas Smith, “Ball Cap” by Glen Tempelton and “Lipstick” by Kip Moore are the three songs Schilling will listen to on repeat, as he tries to get his mind ready for the game.

Schilling will then re-enter from the main entrance at the front of the building and feels mentally ready.

“At that point, I am pretty much as relaxed as I’ll get,” he said. “It’s usually dark and I am very much by myself.”

At 6:15, Schilling heads back to the locker room, giving him 15 minutes before the team starts to warm-up on the ice. He will follow the same routine has been following for ten years.

If anything is done out of order, Schilling has to start over.

“I have gotten to the point now, if I put on the left pad first, I will take it off and put on the right one back on,” he said. “I haven’t done that in a while though, since I started getting used to it.”

On the ice, Schilling always warms up with five rounds of a game he plays with his teammates on the ice, called rebound.

Then he exits the net.

In his final superstition before the match, Schilling will tap both skates on the right side of the rink and then come back to the net. 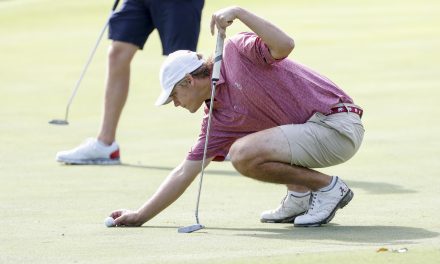