Alabama volleyball coach Ed Allen said that despite coming away with a 3-0 sweep Friday morning against Southern, he wasn’t all that pleased with how the team played.

He said what he saw Friday night during the Crimson Tide’s 3-1 victory over Murray State was more encouraging.

“Murray State is a team that’s extremely talented…felt pretty about how we defended them,” Allen said. “Ball control was much more solid. Could’ve been better…but the three sets we won I was pretty pleased with how we blocked the ball.”

Sophomore Hayley McSparin had 14 kills and a career-high 11 blocks for a double-double. She led the Crimson Tide in both categories, while also hitting a team-high .611 on her attacks.

McSparin said she felt like she had played well after the match, but didn’t know that she’d had a career night until she made it to the locker room.

“It felt like I had a lot of good control. If you’re always touching the ball you always have control during the game,” McSparin said. “I was unaware I had that many blocks. I actually came into the locker room and said I needed to improve on my blocking, so it was good to hear those numbers.

The team as a whole had 14 blocks, a new season-high. Allen said controlling the net was key in on a night when he felt the passing could have been better.

“I thought we did a great job of serving the ball and creating some easy opportunities for blocks,” Allen said. “We had great balance. We had four hitters that were carrying a load and a fifth that did her job blocking and coming up with kills.”

The match was close, with 19 ties and 10 lead changes. The first and third sets were tight affairs, with 17 of the ties and nine of the lead changes coming in those frames. Alabama won the first set 25-21 and Murray State won the third set 25-22.

In the second and fourth sets, however, Alabama earned 25-15 victories. Allen said the team was playing with more confidence in those parts of the match.

“I think playing with some degree of confidence [was the difference],” Allen said. “When you’ve got four kids doing a pretty good job offensively for you, it’s easier for it to be that way. I thought we did a better job of settling in, and our backcourt defense really did a good job of not moving with contact and really trying to read and react to situations, as opposed to guessing.”

Now 10-2, they’ll be looking to extend the current seven-game winning streak to eight. Despite losing just one set today, they’ve already pinpointed what they want to improve upon in the next match.

“We talking about improving on keeping our energy up throughout the match and to continue passing at a higher number than what we did today,” McSparin said. 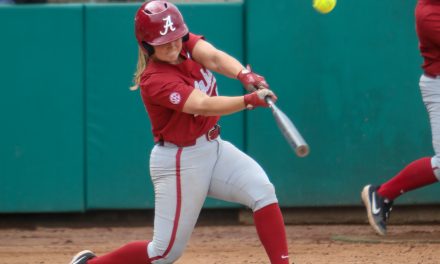