In the 24th minute of action, playing against No. 3 South Carolina on the road, Alabama’s starting midfielder Kaley Verpeale went down with a severe knee injury that later would be identified as a torn ACL. Faced with the difficult task of replacing a player who had been a critical factor in Alabama’s on-field success, coach Wes Hart called on a player who he knew would be ready to stand up to the challenge: senior midfielder Maddy Anzelc.

Having settled into a supportive role on the team up to that point in the season, Anzelc was startled, but ready, when Hart called her name to take Verpeale’s place.

“I was not thinking that I’d be going into the game that day,” Anzelc said. “When he said my name to go warmup I was not panicked, but surprised. I felt nerves, because I always get nervous before games, but when you go in your nerves shift to adrenaline and I just didn’t think about anything else.”

Once she was in the game, Anzelc quickly shrugged off her jitters and delivered a sterling performance that helped Alabama come close to knocking off one of the premier teams in the country. Impressed with Anzelc’s ability to seize the moment, Hart rewarded her with a start against Chattanooga a few days later.

“We knew Maddy was capable of stepping in and she did a fantastic job of it [against South Carolina] and she has earned the opportunity to keep going,” Hart said.

Anzelc returned Hart’s favor almost immediately, scoring her first goal of the season in the 10th minute of play by sneaking the ball past a helpless UTC goalie. Since her breakout game against UTC, Anzelc has morphed into a key contributor for the Crimson Tide, starting in two additional games and recording five shots.

Although no evidence of it can be found in her play on the pitch, Anzelc’s adjustment to her newfound role has not been seamless. The most difficult aspect of the change for Anzelc has been adapting her practice routine in days after games.

“We have practices the day after games and if you don’t play a certain number of minutes in the game you participate in those practices,” Anzelc said. “It’s hard because I see the people I spent every Saturday with for the past four years out there working really hard and I’m just stretching.”

Admittedly challenging at times, Anzelc’s modified role has also provided her with a dual perspective on what it means to be part of the team.

“I understand both sides now,” Anzelc said. “The supporting role, you need to stay fit and work hard so you can step up to the challenge. On the other side, the players who play heavy minutes need to recover their bodies.”

While Anzelc and other Alabama players have worked tirelessly to ensure that the team’s performance has not suffered in the absence of Kaley Verpeale and Brynn Martin, who is currently sidelined with a right knee injury, Alabama has struggled over the past few weeks. According to Hart, the team’s minor backslide is a direct product of the strenuous stretch in the team’s schedule, not the players who take the field for Alabama.

Alabama is still searching for its first SEC win of the season, after losing to both No. 3 ranked South Carolina and No. 6 Florida on the road. The Crimson Tide also played to a draw after a double-overtime battle against LSU.

When Alabama faces off against No. 25 Tennessee at 6 p.m. on Thursday at home, Hart expects his players to continue to perform the way they have all year: with smart, aggressive play.

“I expect the same thing that we’ve been seeing all year long,” Hart said. “We’ve been very competitive, showing the ability to fight and battle. We’ve shown the ability to maintain possession of the ball and create and attack and I don’t expect to do anything different than we’ve done all year long. Hopefully, we’ll get rewarded for that by putting the ball in the back of the net a couple times.” 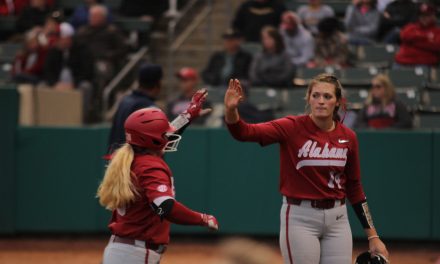