With Tuesday’s win over No. 19 South Carolina behind him, Alabama coach Avery Johnson felt good about his team’s chances of upsetting another ranked opponent on Saturday. The No. 15 Kentucky Wildcats’ film didn’t look bad, but in Johnson’s mind the Wildcats looked very beatable.

Then the game started and Johnson got a look at his own team.

“Our first half was just pathetic,” Johnson said. “I don’t know another word. I was really disappointed in our effort.”

The Crimson Tide’s nine-point halftime deficit ended up being the difference in the Wildcats’ 67-58 victory. In the loss, Alabama players missed nine of 26 free throws.

“Avery [Johnson], what he’s done, they are one of the top 25 defenses in the country- they are,” John Calipari said. “And the game was a little ugly because we tried to defend for the first time in three weeks.”

The list of other teams that have held Kentucky to 70 points or less includes No. 3 Kansas, No. 4 Louisville, No. 17 Florida and Michigan State, but Johnson didn’t want his defense to take all the credit after the game. Not when he watched Kentucky make so many mistakes.

Johnson’s team trailed the No. 15 team in the country by as much as 18 points in the second half until a 21-9 Alabama run made it a six-point game with 102 seconds left to play. Kentucky’s Derek Willis knocked down a shot behind the arc before Malik Monk traded layups with Alabama freshman Braxton Key to keep the Wildcats (20-5, 10-2 Southeastern conference) ahead of the Crimson Tide (14-10, 7-5 SEC).

During that nine and a half minute stretch Kentucky’s top scorer at the time, Edrice Adebayo fouled out with 14 points and seven rebounds.

“Bam [Adebayo] is a great rim protector,” Key said. “I’ve been playing against him since we were kids. I mean he’s always been blocking my shots, but with him off the court I knew the middle was easier to get to and finish.”

Key, the game’s leading scorer, recorded nine of his 21 points once Adebayo left the game, but the Kentucky Wildcat wasn’t the only one responsible for Key’s struggles on Saturday.

After the game Key described his own performance in the first half as soft.

“I can’t be play the way I did the first half, and I won’t the rest of the season,” Key said. 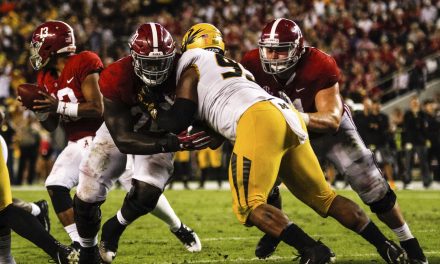