ATLANTA- Alabama’s defense had not allowed a touchdown in three-and-a-half games. It was used to shutting down opponents, but the Florida Gators wanted to reach a part of the field that very few had.

The Gators drove 64 yards on a 10-play opening drive to take a 7-0 lead on The Crimson Tide. The streak that lasted four hours and 33 minutes of game time had come to an end. Defensive lineman Dalvin Tomlinson said the defense knew what it had to do after falling behind early.

“We weren’t worried too much, because we knew what we messed up on,” Tomlinson said. “We had some busted coverages and stuff like that, so we knew we had to fix those things. After we fixed those, we knew we would be fine.”

On that drive, Florida quarterback Austin Appleby went 6-of-7 for 67 yards. The Gators completed third-down passes of 13 and 18 yards. Linebacker Reuben Foster, who won the game’s MVP award, said the touchdown left the defense with a sour taste its mouth.

“When they scored, it hurt us,” he said. “We don’t normally do that [give up touchdowns] and we don’t want to do that.”

Alabama’s defense, like it has all year, responded in the Crimson Tide’s 54-16 victory. On the next drive by Florida (8-4, 6-3 in SEC play), linebacker Shaun Dion Hamilton picked off Appleby and took it to the 11 yard line. The drive after that, defensive back Minkah Fitzpatrick intercepted Appleby and ran it in for a touchdown.

The play of the defense on these two drives turned the momentum of the game in favor of the Crimson Tide (13-0, 9-0).

“It is one heartbeat, one sound,” said linebacker Tim Williams. “If I don’t make the play, oh well. I know somebody on my team that is going to make it.”

Foster had a big game for the Crimson Tide. He became just the fourth defensive player in SEC Championship history to take home MVP honors. Foster finished with 11 total tackles, nine solo tackles and two sacks in the win.

“Reuben [Foster] was a man possessed,” Williams said. “He inspires me. When I look back, I just know that I have to go to keep up with his level.”

Foster has been a leader for Alabama all season at the middle linebacker position. His 94 total tackles leads the team. For Williams, seeing Foster win MVP is almost about more than just football.

“That’s my brother,” Williams said. “I love him. We came in together in 2013 as freshmen. We grew together. That is like my best friend. I love him. I am just so happy for him to get MVP because I know how much he put in the work. The guy is amazing.”

Foster anchored an Alabama defense that gave up 0 rushing yards–the second lowest total in the SEC Championship Game since Auburn had negative 15 yards in 1997. The team entered in the game ranked No. 1 in the NCAA in rush yards allowed, and tonight it was on display.

“That is what Alabama is built on. [Stopping] the run,” Williams said. “If you run the ball at us, we welcome it. We embrace it. Helmet-to-helmet. Head-on-head or whatever. That’s football. That’s what we have pads for.”

Outside of the two interceptions, perhaps the biggest play for the defense came in the third quarter. Florida had just completed a big play down inside Alabama’s 10 yard line. After, that Alabama stopped Florida on four-straight plays, including a goal-line stop on third down.

Linebacker Rashaan Evans made the initial hit on the third-down play, driving Florida back and giving Alabama’s defense even more confidence.

“I saw the offensive line kind of opening up and I saw the running back so I took a chance and ran through it and I got some contact on it,” Evans said.

In the second quarter, defensive back Tony Brown brought the turnover total to three when he intercepted Austin Appleby. The Crimson Tide’s 84 yards on interception returns is the second most in SEC Championship history, only trailing its own performance in the 1999 game against Florida.

Alabama has shut down teams and forced turnovers all season. With a possible College Football Playoff berth looming, the defense knows that it can have a big impact on any game.

“When we execute to the best of our ability, we can change the game at any second,” Tomlinson said. 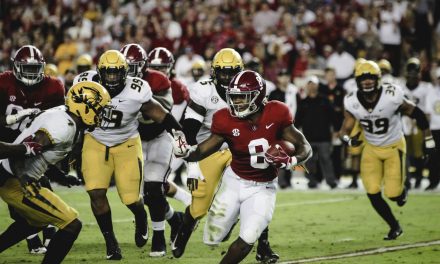 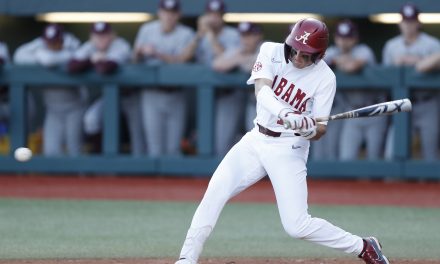