ATLANTA – On Saturday, the No. 1 Alabama Crimson Tide defeated the No. 15 Florida Gators in the Southeastern Conference Championship Game 54-16.

With the win, Alabama has now won the SEC three years in a row and five times in coach Nick Saban’s 10-year career with the Crimson Tide. Since it started in 1992, only Florida had won the SEC Championship three or more times in a row. The Gators won four-straight SEC titles spanning from 1993-1996.

The Gators and the Crimson Tide have now met nine times in the SEC Championship Game with Alabama now holding a 5-4 advantage in such meetings.

In the 25th year of the SEC Championship, Alabama extends its current winning streak to 25 games. The Crimson Tide’s last loss came on Sept. 19, 2015 when the team fell to Ole Miss, 43-37, at home.

Moment of the game

After returning an interception for a touchdown on the previous drive, Alabama’s Derrick Gore blocked a punt. The ball landed in the hands of running back Josh Jacobs, who then ran it in to put Alabama up 16-7. On the ensuing extra point, Florida blocked the kick and David Reese returned it for a two-point conversion, making it 16-9. 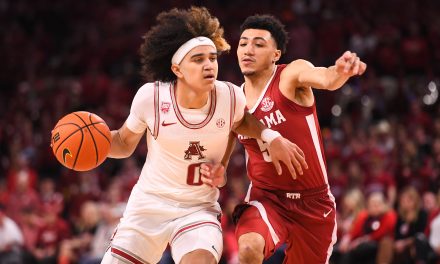