The then-undefeated No. 2 LSU Tigers trotted in to Bryant-Denny Stadium with the utmost confidence in 2015. Their running back, Leonard Fournette, was the Heisman Trophy frontrunner and came into the game running for at least 150 yards in all seven games. The question from everyone was, “Could he be stopped?”

Fournette caught a quick pitch early in the first quarter and quickly burst to the edge for what looked like would turn into a big gain, and then a blur of former Alabama defensive back Geno Matias-Smith took out his legs. Fournette gained just two yards for his first carry and would only gain 29 more yards on 18 more carries. Alabama shut down LSU, 30-16.

“He’s a great running back as you’ve seen over the past couple of years. He’s an explosive back, can make plays that happen anytime. We have to work hard to prepare for him this week,” defensive tackle Dalvin Tomlinson said. “Last year, we just came out an out-executed the offensive line, getting off the blocks and opening up gaps for our linebackers so they wouldn’t be blocked… and we just executed the whole game and were able to stop them.”

Fournette would not be the same for a while after the 2015 loss. LSU stumbled and lost two more games after the loss in Tuscaloosa. It could not score more than 20 points until its bowl game. Fournette struggled with an ankle injury, missing three of the first six games this season, and the Tigers faltered to a 2-2 start that resulted in the firing of long-time coach Les Miles.

Again, the team relied on the rushing game but could not produce.

Then, LSU named Ed Orgeron as the new head coach, and the wins returned, due in part to the resurgence of the rushing offense. LSU is now averaging fourth in the conference at 239.86 yards per game, and in the three games, Fournette and fellow running back Derrius Guice helped lead a rushing attack that gained 912 total yards.

“Leonard Fournette is probably one of the most dynamic running backs that has played in college football for a while and is playing extremely well right now,” Alabama coach Nick Saban said. “And when Guice comes in for him, there’s not a lot of drop-off there.”

While Fournette missed time, sophomore Guice got the call. Guice did his best Fournette impersonation and rushed for 486 yards and six touchdowns in the three games Fournette was sidelined. Now, with Fournette back, LSU has a two-headed monster. Guice now gives Fournette some much-needed rest and then runs with similar authority.

LSU may be stacking up the rushing yards, but the Tigers haven’t faced the nation’s best rush defense yet. Alabama is again the No. 1 rushing defense in the nation and has only allowed 70.1 yards per game and only 2.2 yards per carry. This is where the game will once again be decided. Can Alabama stop the two-headed monster of Fournette and Guice, or will the combo finally break through against the nation’s toughest run defense and control the ball? The answer to that question may very well decide the game.

“If we come out and execute like we can, I feel like we’ll be able to stop it,” Tomlinson said. 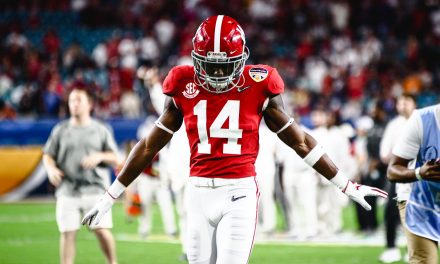