After taking down an AP top 10 opponent on Saturday, No. 1 Alabama will face another top 10 team exactly one week later. The Crimson Tide dismantled the No. 9 Tennessee Volunteers 49-10, and now faces a quick turnaround as the last two undefeated SEC teams square off this weekend when No. 6 Texas A&M makes the trip to Tuscaloosa.

“After watching the last game, we probably approached playing the most complete game that we played all year,” coach Nick Saban said. There’s obviously many things that we can improve on. I think the question is do you rest on your laurels or do you stay hungry to try to improve, build on the things that you did correctly and fix the ones that you didn’t.”

Texas A&M is the sixth ranked team for a reason. The Aggies rank second in the SEC in points scored per game just behind Alabama at 40.17. The Aggies are first in yards per game at 532.83. The offense was jump-started this year in much part do to transfer quarterback, Trevor Knight, who leads SEC quarterbacks with 502 rushing yards and also has 1,500 passing yards. The defense is no pushover either ranking second in the SEC for sacks behind only Alabama.

“We’ve got to move on to the next game, which is a very, very challenging team. Texas A&M probably presents as many issues as any team that we’ve played all year,” Saban said. “A lot of things [are] important for us to do very well in this game, and it’s going to take all phases going well to have a chance to be successful.”

The win against rival Tennessee was the largest margin of victory in the rivalry since 1906, when Alabama won 51-0. It was a big win, and a hard one to leave in the past, but Saban knows the team needs to forget to focus on the Aggies.

“None of us really think any differently just because we had two good wins. More so than anything, we just want to keep working on improving. That’s more motivation to get better each and every day at practice, finish every drive at every game,” running back Damien Harris said. “We try to maintain a sense of humility because we made a lot of mistakes in both games and there’s still room for us to improve. So we try to emphasize staying humble and hungry.”

Alabama is ranked No. 1 in the nation, but Saban knows that can change quickly Saturday. He does not want his team to let outside talk distract from The Process.

“First off, I don’t know what the outside talk is. Most of you (media) create it, whatever it is,” Saban said. “We encourage the players to stay focused to the things that matter. Those are external factors that I call clutter that really can affect your psychological disposition about how you need to compete in the next game, because you can get satisfied with people patting you on the back for what you did last week, then you get punched in the nose the next week.” 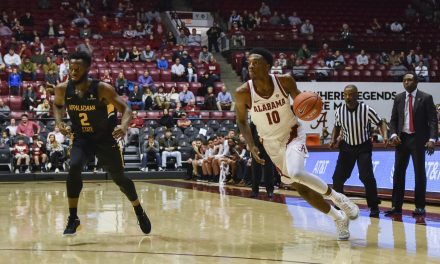 Alabama drops to No. 12 in Coaches Poll