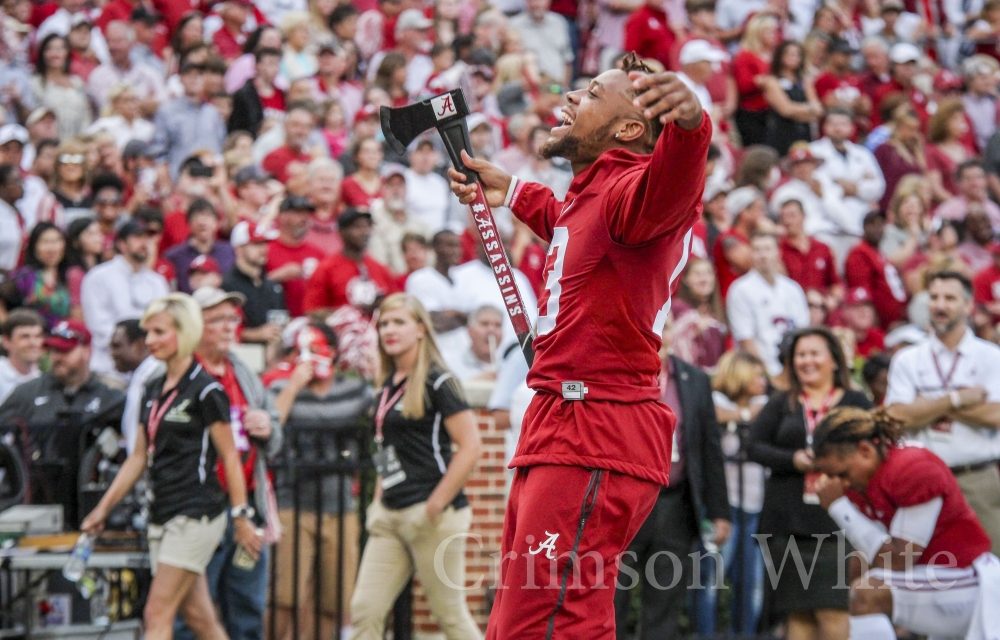 Alabama wide receiver ArDarius Stewart wasn’t able to take the field during his team’s 34-6 victory over Kentucky due to injury, but that wasn’t going to keep him from having an impact on the game.

When Stewart walked into the locker room with his teammates, he had watched plenty of guys on the offense struggle in his absence — quarterback Jalen Hurts was 10-of-20 for only 89 passing yards with no touchdowns.

Facing a third-and-10 early in the third quarter, Ridley did just that and nearly doubled Alabama’s passing yards at the time with his 46-yard reception. Two plays later, Ridley hauled in a 10-yard touchdown pass.

When he saw his teammate finally find the end zone, Stewart rushed over to congratulate his fellow “assassin” and handed him the axe.

“It’s assassins,” Ridley said. “We try to play tough and chop your head off at the receiver position. Stew brought that out for us that’s all we live by.”

Hurts hooked up with Ridley again in that same quarter, this time from 19-yards out. The quarterback finished the game 20-of-33 for 262 passing yards and two touchdowns.

The second touchdown also happened to be Ridley’s 10th catch of the game, a new career-high for the sophomore. But, Ridley wasn’t done yet.

He hauled in a 43-yard catch from Hurts moments before the fourth quarter that kicker Adam Griffith cashed in for three points a few plays later to end Alabama’s final scoring drive.

Ridley finished the game with 11 receptions for a season-high 174 yards and two touchdowns, but he wasn’t the only offensive player to have a career performance.

True freshman running back Joshua Jacobs started for the first time in his career in place of running back Damien Harris, and Jacobs made the most of it.

Jacobs was called upon to carry the ball five consecutive times for 56 rushing yards early in the second quarter. The amount of carries didn’t seem to deter the coaching staff, and Jacobs took his sixth carry one yard in for the score. Like Ridley, the freshman running back also set a new career-high when he scored on his 12th carry of the game.

“Oh, he’s a bowling ball. He’s a good running back,” Ridley said. “I see him, when we first got here, he was one of the young ones that would block and would do anything to get on the field. Everything he’s doing, he’s done it in practice. He deserves everything he’s doing.”

Jacobs finished the game with 16 carries, a career-high 100 rushing yards and a touchdown. He also caught three passes for 44 yards to outgain all the other pass-catchers, except Ridley.

“[Jacobs] really understands how to press the hole and make cuts. He’s got quickness, he’s got a little burst of acceleration, he’s got good hands,” Alabama coach Nick Saban said. “We needed one of our freshman backs to step up this year.”

The glue of women's golf

Rowing hits the road to take on Bucknell