The redshirt senior ended the day comfortably past that total.

“Krystal Rivers put on a show here that I haven’t seen maybe but a couple times in my career,” Alabama coach Ed Allen said. “She offensively was a one woman wrecking crew and did a great job of blocking, touching balls, did a terrific job at the service line, every aspect of her game has gotten better.”

Rivers was quick to credit her teammates for her elevated play, though.

“I was getting some pretty great balls from my teammates,” Rivers said. “I feel like I didn’t do any silly errors and took care of the ball [Friday] and it’s what the team needed. You know, you have those days where you want to step up a little bit and the team helped me. They kept me energized to do that.”

In the evening action, Alabama started off by winning the first set, 25-20. Southern Miss responded by taking the next two sets, 25-23 and 25-21. Despite the struggles in those two sets, Alabama didn’t feel panicked about the match.

“We had a lot of people trying to pick us up,” Rivers said. “A lot of our bench players were saying, ‘Remember, this is our house, let’s play with energy and composure, let’s play confidently.’”

Freshman outside hitter Hayley McSparin said the team was determined to play within itself and win in front of its fans who were cheering the team on all throughout Friday’s play.

The Crimson Tide rallied to win a tight 25-23 fourth set to force a fifth set where Rivers came up with nine kills to lead the Crimson Tide to a 15-9 set win to claim the match.

“As a freshman I definitely look up to her,” McSparin said. “Whenever I see her get those career high kills I just want to get behind her, and I support everything she does.”

The 38 kills for Rivers against the Golden Eagles is the most in a match for any Alabama player since Michelle Green’s 38 against Eastern Michigan on Sept. 19, 1998. Rivers finished with 45 kills between the two matches.

McSparin hit .481 with 14 kills and a single error on her 27 swings throughout the day. Redshirt freshman setter Shannon Mikesky added two double-doubles with 92 assists and 21 digs.

The Crimson Tide improves to 7-2 on the season with its pair of wins. It concludes its participation in the Hampton Inn Bama Bash on Saturday morning at 11 a.m. against Lehigh.

“The attitude was that this is our house and we’re not going to lose in it,” McSparin said. 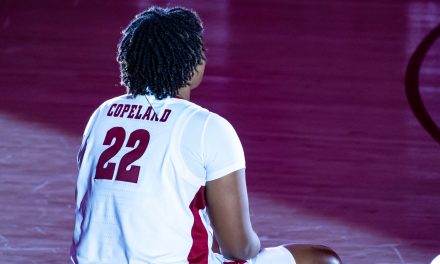 Kobe Bryant not done yet