Broken records at the Vanderbilt Legends Club in Franklin, Tennessee, led to the Alabama women’s golf team winning its second straight Mason Rudolph Championship this past weekend. The Crimson Tide’s final score of 39-under par shattered last year’s score of 16-under par for both a school and tournament record at the par-72 course.

Sophomore Cheyenne Knight led Alabama with a 14-under par, while bringing home medal honors. Knight broke an eight-year record of 13-under par set by Kathleen Ekey at the 2008 Crimson Tide Classic.

Junior Lakareber Abe’s par 63 card on Sunday broke the previous record by two shots, helping her tie for fourth in the final standings.

“I don’t think a lot about (records) but I know one thing, they hung in there and kept their wits about them,” Alabama coach Mic Potter said. “It’s really nice to see them get that deep under par and not back off but keep going forward.”

The closest competitor of the weekend was Southern Methodist, finishing second in with a 4-over par.

Alabama’s next test will be this weekend at the University of Oklahoma’s Schooner Fall Classic in Norman, Oklahoma.

“I thought they did a good job of not paying attention to what was going on around them, taking it one shot at a time and doing their job,” Potter said. “I just hope we can take that forward and continue.” 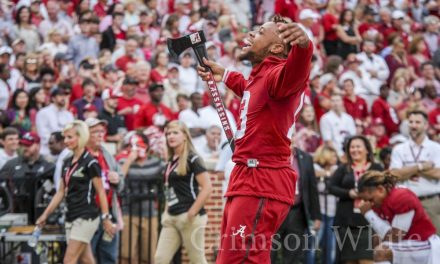 Looking back on senior seasons