Energetic, strict and high energy are just a few of the adjectives that describe first year coach Greg Goff.

His first official practice as the 31st head coach for the Crimson Tide baseball program was on Monday. Goff made sure it was an intense one. If there was a play where a player should dive but didn’t, he made sure they knew they should be giving a full effort.

The players were taking live batting practice, being thrown by none other than Goff, and he made sure that the players hit to the opposite side of the field.

Alabama baseball working on hitting the ball the other way pic.twitter.com/ocxHLMC0Y2

Hitters were split up into different groups, taking live batting practice, fielding in the outfield/ infield, sprints and medicine ball work outs.The batters used wooden bats instead of the metal ones they will use during the season.Batters worked on all kinds of bunts (sacrifice, bunting for a hit and drag bunt.)Goff introduced a point system for the fielders (one point per dive while making the play).Pitchers were doing bullpens, flat ground work and PFPs (pitchers fielding positions.)Chandler Avant made a successful return to the field after his broken ankle.Players worked on foot work drills including three cone drills. 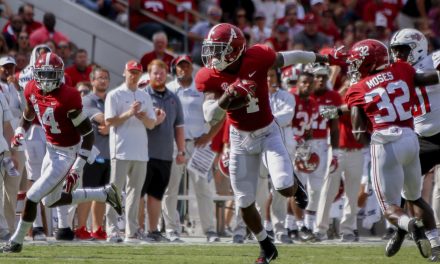