The University of Alabama gymnastics team held its senior night on Feb. 26, but Saturday officially marked the last time seniors Lauren Beers and Carley Sims will ever compete in Coleman Coliseum.

Competing on its home turf, the Crimson Tide claimed first place at the NCAA Tuscaloosa Regional meet, scoring a 197.125 and advancing to the NCAA Championships. Alabama now holds an NCAA-best 31 regional titles and has won 12 in  a row.

Although there wasn’t a perfect-10 score, there were two 10s awarded by individual floor-exercise judges. As Alabama’s final two competitors for the event, Beers earned the first 10 and Sims earned the second 10, anchoring for the Crimson Tide.

They’ll head to Fort Worth, Texas, on April 15 for semifinals. Soon, the two will have to retire their crimson and white leotards.

Beers and Sims both had a less-than-ideal regular season for their final year. Beers has faced four falls on the balance beam and a break on the uneven bars, while Sims had to sit out six meets at the beginning of the season due to an ankle injury that ended up requiring surgery.

But they overcame the adversity together.

“Being only the two of us, I think we have a lot different relationship than other classes do just because we can be so close,” Beers said. “I know she’s had a huge impact on me, and I’m definitely thankful for the past four years we’ve  had together.”

Except for the few blemishes here and there, the two normally post high scores, like they did on Saturday. They also share the same favorite event – the floor exercise – where Sims anchors, holding a career-high 9.950, and Beers performs right before her with a career-high 9.975.

Regardless of the competitive similarities, Beers and Sims are on different ends of the spectrum personality wise. Duckworth called them night and day.

“As you talk to them, you can tell – completely polar opposites,” she said. “But you know how they say a perfect relationship is opposites attract? They need each other, and they do well [together].”

Beers said she is a quiet introvert, while Sims is a loud extrovert. She finds it funny that they’re so different, but she wouldn’t have it any other way.

The contrast in personalities compliment one another, creating a diverse senior leadership for the team.

“They are both different examples, but they are both examples of hard work; they’re both examples of people that understand intensity and take it and run with it,” Duckworth said. “Carley [Sims] takes it to Carley world, and Lauren [Beers] focuses very hard. It works, it’s instrumental, and it’s wonderful that these two are our seniors this year.”

Out of the two, Beers is the more cool, calm and collected senior. Normally referred to as Alabama’s “Mama Bear,” the team relies on Beers, trusting her whole-heartedly.

Sophomores Mackenzie Brannan and Kiana Winston said Beers is the person they go to for comfort and reassurance, someone to tell them everything is going to be OK. They know they can talk to her about anything, and she’ll be there with open ears and a kind heart.

“My freshman year, I can just remember coming in and she was just already there, like she was there for anything I needed and I knew I could go to her,” Brannan said. “She’s definitely just put an arm around me, taken me in, and I think that’s a great quality of hers and makes her such a  great leader.”

Over the course of the season, select Alabama gymnasts have stepped up and claimed specific events to speak before. Beers is the center of attention before the Crimson Tide competes on the vault, and rightly so, since she knocked out a perfect-10 against Georgia on the apparatus, marking Alabama’s first and only perfect-10 this season.

Her mama-bear instincts kick in and she refocuses her team, regardless if she or a teammate has faced a hiccup during the previous event.

Beers knows she can be a perfectionist at times. She has been working on getting away from that mentality and instead, is focusing on simply enjoying her last season at Alabama, which is all Duckworth and the rest of the team want for her.

“Be a mama bear, but don’t feel like you need to bear the weight of the world on your shoulders because you can’t,” Duckworth said. “When you go into the next chapter of your life, you can’t  then either.”

Duckworth believes Beers is starting to learn and accept that mindset.

Beers has shown her coaches a great amount of humility throughout the season, but more importantly, a large amount of personal development and confidence.

Putting her up-and-down season plagued with falls behind her, Duckworth believes Beers is in a better place now and has changed her mindset from thinking, “I have to do this” to “I get to do this,” and that has made all the difference in her preparation and competition.

On March 28, Beers earned second-team All-American honors on the vault, but four days before that announcement, she received another honor. She was named the SEC Gymnastics Scholar-Athlete of the Year, marking the sixth Alabama gymnast to do so.

As a three-time Scholastic All-American, Beers completed her undergraduate degree in exercise science in three years, and she did so with a perfect 4.0 GPA.

Now, she is pursuing a master’s degree in  sports management.

“The past four years have flown by,” Beers said. “Junior year, you’re like, ‘Oh, it’s not that bad. I still have one year left,’ and then senior …read more 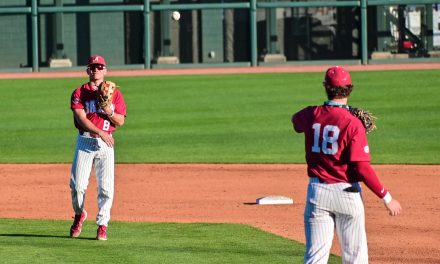