When coach Avery Johnson took over as the men’s basketball coach he knew he needed to change more than the team’s tempo on offense. He needed to change the team’s attitude and drawing comparisons to Biblical characters, children’s stories and professional athletes help him do that.

But sometimes a coach needs something more tangible. Something he can put in his players hands.

“We got their [Kansas City’s] championship bat and just said every time we win a game somebody is going to sign the bat,” Johnson said. “That’s kind of our little symbol for our player or players of the game and we’re trying to hit it out of the park and that’s a home run bat, that’s a championship bat, and that’s what we’re trying to build towards.”

Johnson acquired the bat from the Royals after reaching out to the team last year. Johnson was inspired in part, by Kansas City’s recent success after years of adversity.

“It reminded me kind of my situation here,” Johnson said. “I wanted to come and try to do something that’s never been done before.”

The bat has come to mean a lot to the players Johnson coaches. It’s not uncommon to catch guys discussing the bat at practice.

Sometimes that’s where the bat is earned. For the team, bat is a symbol of winning, but Johnson is prepared to recognize the role hard work plays not only during the victory, but during the preceding practices.

“It’s a real big accomplishment,” Riley Norris said. “Signing the bat’s really important. You want to help your team, but I’m just glad, like I said earlier, that we’re coming and we’re winning. Cause winning is so much more fun.”

Norris said the bat serves as a reminder of how far this team has come. In the preseason Alabama (16-9, 7-6 SEC) was picked to finish the 13th in the league, but five consecutive victories have the Crimson Tide currently tied for No. 6 in the conference with a good chance to finish even higher than that.

If Alabama wants to extend the SEC’s longest active winning streak and give another player a chance to sign the bat then the Crimson Tide will need to take care of business tomorrow against Mississippi State at 1:30 p.m.

“[We chose the Royals because] we wanted a team that basically symbolized the David against Goliath right, [or] the little engine that could, because we thought we fit that profile,” Johnson said. “Now maybe five, seven, 10 years from now if this University we’ll have me back, maybe if we’ve won something we can take on the personality of somebody that has been perennial champions.” 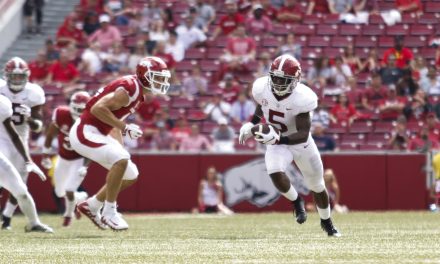