DALLAS — Shilique Calhoun is happier about the way 2015 is ending than how it started. Don’t get the Michigan State defensive end wrong–he enjoyed beating Baylor in the Cotton Bowl on Jan. 1, but he likes the style of football Alabama plays.

It’s not so different from Michigan State.

“Both of our head coaches are stern, don’t smile too often,” Calhoun joked.

It comes down to more than just the coaches, into the style of play: direct, pro-style offenses and run-stopping, front-heavy defenses. It’s not a surprise considering Michigan State head coach Mark Dantonio coached under Alabama coach Nick Saban while the latter was in East Lansing.

But Alabama does have something the Spartans don’t: a Heisman Trophy winner in running back Derrick Henry.

Michigan State boasts the No. 7 rush defense in the country, allowing 113.1 yards per game. The defense allows 20.5 points per game. Alabama’s offense averages just over 34 points a game and Henry nets just under 153 yards on the ground a game.

Calhoun said the Alabama offense does its job well and Henry creates on his own too. The key is limiting his big games.

“I think he does a good job of making up where they lack at,” Calhoun said. “If they’re not blocking well, he’ll find a gap and he’ll make someone miss. I think you have to specifically attack him and slow him down because it’s going to be hard to stop him as you can see. It’s not too easy to go out there and be like, ‘I’m going to stop Derrick Henry’ but I think that if you slow him down and minimize his big plays, you can come out successful.” 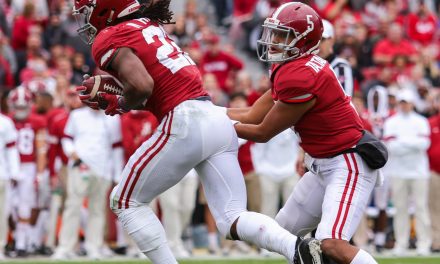 Floor it: Gymnastics seeks to improve in regional appearance