From the Olympic Stadium to Alabama Soccer Complex

Standing on the field at Olympic Stadium in Montreal Celia Jimenez looks into the stands to see her parents. She then flashes back to the moment when she kicked her first soccer ball at the age of six.

She reminisces about the trip to the stadium with police escorts, and the tires on the bus rolling through a red carpet. She thinks about the level of competition increasing from when she was that six year old girl playing soccer in Alcaudete, Spain to 13 years later playing on Spain’s national team in the 2015 FIFA Women’s World Cup.

“I usually don’t get nervous before games, but that one I was really nervous,” Jimenez said. “I was talking to my mom the night before, and it was like I been playing soccer for so many years, and I feel like I’m relearning everything. But, it was all about building my confidence before the game, because once the referee blows that whistle, there is no nervous.”

Her key role in her first World Cup appearance, was to dominate the time of possession for her team. They ended the match with in a 1-1 draw against Costa Rica. She started in all of the country’s three matches in the World Cup. Their next two matches were losses to Brazil and South Korea.

After Spain’s elimination, Jimenez came back to the University of Alabama, where she was enrolled during the spring semester. There were no police escorts or red carpet. Instead, Jimenez rides her longboard to Hardaway Hall and continues to play the sport she grew up playing.

Jimenez became the first active player in the history of the Alabama women’s soccer program to appear in a World Cup.

“When people ask me how that moment felt like, I think a lot about it and I can’t ever find words to describe it,” Jimenez said.

Jimenez has been successful with many teams throughout her young career. By the age of 14, she represented Spain on every national youth team and made a total of 24 appearances in both the U-17 and U-19 team.

In 2009, she played a season with Real Jaen, before playing with Sevilla FC in the Primera Division. While playing on Spain’s U-17 team in 2011, her team won their second UEFA Women’s Under-17 Championship in the country’s history by defeating France in the finals 1-0

“I was always used to playing with people 6-10 years older than me,” Jimenez said. “I learned a lot, they taught me all that experience they got in ten years and taught me that in four years.”

Jimenez wanted to take up aerospace engineering because she loves designing cars and planes, but doing that with soccer in Spain took too much time. She decided to come to the United States and enroll at Iowa Western Community College in Council Bluffs, Iowa after being recruited by Coach Brad Silvey.

In her two year career, she collected 21 goals and 11 assists in a span of 23 matches. She was named 2013 Most Valuable Forward and won the school’s first NJCAA National Championship in women’s soccer history. The following season, she was named on the NJCAA All-Tournament team and First Team All-American on the National Soccer Coaches Association of America.

After her two seasons at IWCC, she wanted to continue her two passions aerospace engineering and soccer, she enrolled to the University of Alabama after receiving several offers from Penn State, Mississippi State, and TCU.

“I was looking for a school that has a good aerospace program, good soccer team, and good weather because Iowa was so cold,” Jimenez said. “Honestly, what made me choose Alabama was something in my heart. I opened the website and saw [it] and the crimson color and just thought this is it.”

Her first goal for the Crimson Tide was in fourth game of the season against Tennessee Tech. On Sept. 11, she scored the game winning goal in a 3-2 double overtime victory against the LSU Tigers. After starting all ten games, Jimenez is top ten in the SEC in shots per game at 3.30.

On Sunday, she scored two goals with eight shot attempts to give the Alabama Crimson Tide soccer team a 2-0 victory over Jacksonville State. She leads the team in shot attempts at 24 and ties Alexis Mouton in game winning goals with one. Never satisfied with individual success, she still looks for ways to improve.

“The way we been raised in my family, it’s like focus what you need to improve on more than what you have already accomplished,” Jimenez said. “I love this team so much and I think we have a lot of potential.” 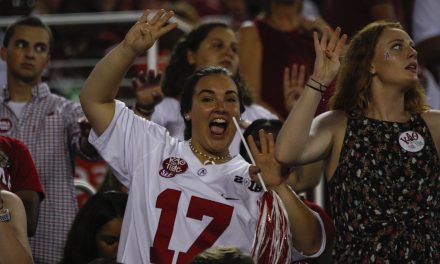 Brad Bohannon begins his tenure at the helm of Tide baseball