Jay Deas has followed boxing his whole life. His brother, Tommy, used to write for various national boxing publications and his father would take them to all the fights within 100 miles. While attending Central High School, he collected over 3,000 boxing matches on VHS tape.

Boxing promoters Butch Lewis and Don King would ask Deas for copies of his VHS fight tapes. Once Lewis, who represented Bernard Hopkins, called him and asked if he had any tape on middleweight boxer Joe Lipsey.

“I looked through my catalog and flipped to Joe Lipsey,” Deas said. “I got 27 rounds on Lipsey, Lewis told me ‘I want em all,’ so I would make tapes and send them to him. I did that for a long time, before YouTube.”

Now, the Skyy Boxing head trainer will be in the corner of World Boxing Council Heavyweight Champion Deontay Wilder as he makes his first title defense against Eric Molina in Birmingham on Saturday. Deas trained Wilder from the beginning of his career, and with his strong boxing IQ, trained him all the way to the top of the heavyweight division.

But Deas didn’t start off with a boxing career. He earned a baseball scholarship at Chipola College in Marianna, Florida. From there, he attended Spring Hill College in Mobile to continue his education and  baseball career.

He interned with journalist Rick Journey until Journey moved to FOX 6 in Birmingham. Journey’s move left a position open for Deas as a crime reporter in Tuscaloosa. He took the opening and worked in Tuscaloosa and Panama City, Florida. He later decided to quit his career as a crime reporter to focus on a career in the sport he loved since childhood: boxing.

Jay and his brother Tommy started working with fighters at a local boxing gym on 40th Street until 1997, when they decided to open Skyy Boxing Gym,  in Northport.

The Deas brothers began putting on shows so their boxers had a platform to perform. Tommy trained and managed the fighters, while Jay was the sparring partner. After boxers showed improvement from competing in those shows, the Deas brothers and their fighters began traveling the world.

The success was a short-lived experience for the brothers. In 2005, Tommy decided to focus on his journalism career and became the executive sports editor for The Tuscaloosa News, leaving Jay with the head trainer duties.

After his brother’s departure, Deas wanted to take Skyy Boxing Gym to the next level. After successful traveling the world and gaining experience in the business of boxing, he needed a premier fighter that would take his gym to that next step. He found that in a young heavyweight named Deontay Wilder.

“He was a really determined kid and he worked just as hard when he didn’t think you were watching him as he did when you were watching,” Deas said. “He was raw and it wasn’t like he was Olympic caliber when he first walked in, people don’t give him enough credit for all the work he  puts in.”

Skyy Boxing wasn’t just for professional boxers. Deas said he made sure the gym was open to the general public. He began training people of different ages, genders, social and racial backgrounds to teach individuals physical fitness, discipline, patience and respect.

“Even though it’s an individual sport in terms of your in the ring by yourself, it’s still a team sport,” Deas said. “You have to learn to deal with a lot of people that maybe aren’t like you. Everyone in boxing is the same when they come into the gym.”

He makes sure everyone that trained in the gym felt at home. His charisma mixed with his hard-working mindset, brought success to the boxing gym and made it easy for people to work with him.

“He is a very silly and serious guy,” said Cuz Hill, one of Wilder’s trainers and the head coach of the Skyy Golden Gloves team. “He takes his job serious and it’s going to be hard, but we try to make the job fun.”

Deas is going the distance with Skyy Boxing Gym. He has plans to expand the gym, but keeping the gym in Tuscaloosa or Northport is important to him and  his team.

“Deontay said it best, when asked if he wanted to move to New York or LA,” Deas said. “‘I knocked out all the guys in New York and LA, why don’t they move to Tuscaloosa?’ This is home.”

Games of the week: Clemson, Auburn meet in top-15 clash 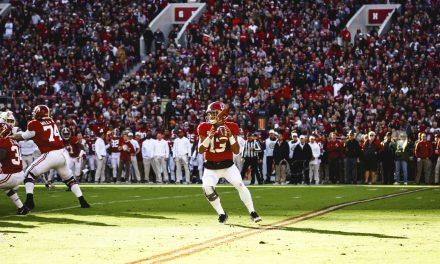 Davis, Herbstreit speak behind the scenes of GameDay