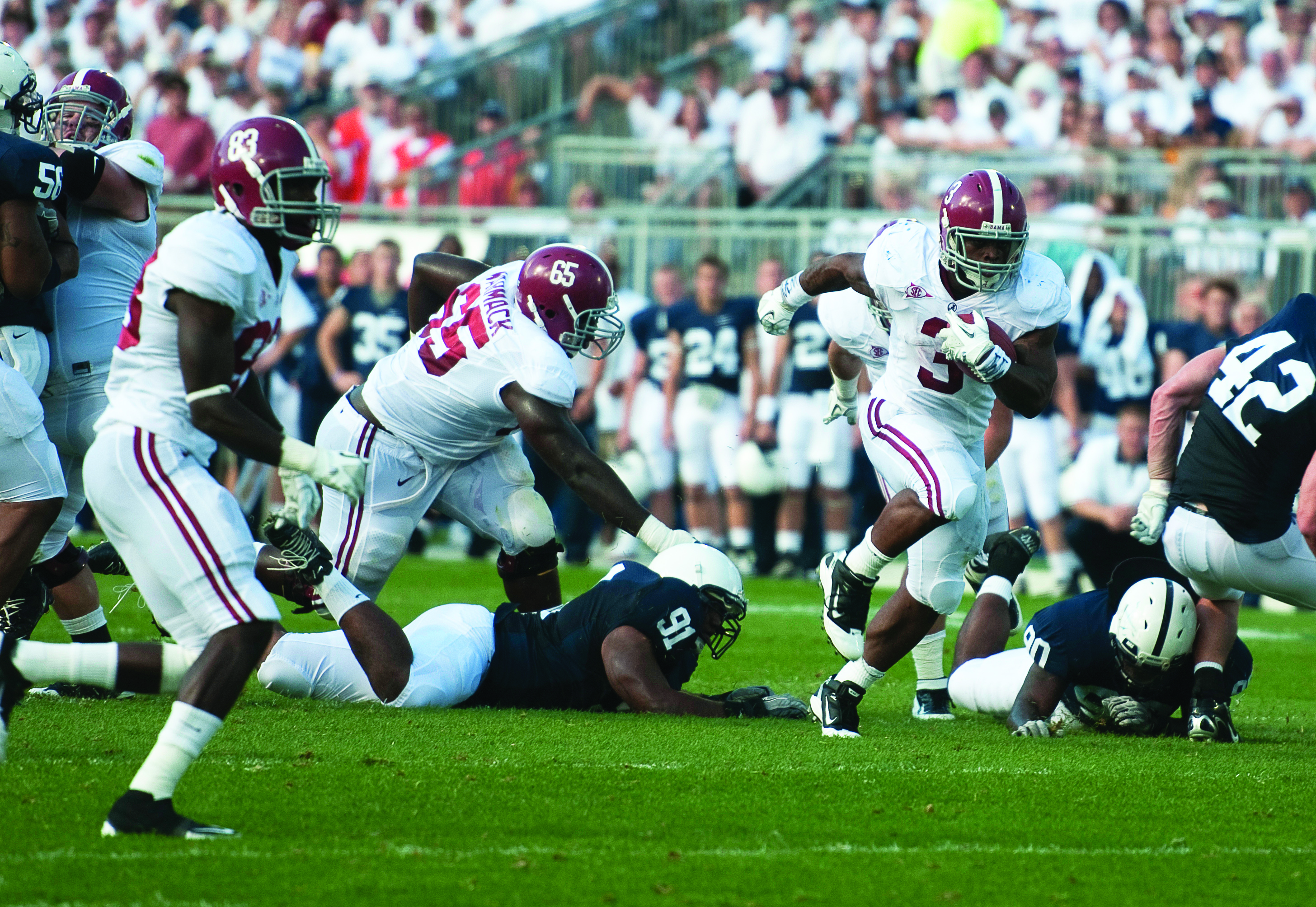 Over the past few years at Alabama, everyone has grown accustomed to a running game that always dominates and wears down opponents. So far, the 2011 season promises the same. With the departure of Heisman winner Mark Ingram, a new set of running backs have stepped up to fill the spot.

Junior Trent Richardson served as backup during his first two seasons. This season, Richardson has the starting position, with sophomores Eddie Lacy and Jalston Fowler backing him up.

In 2010, Richardson rushed for 700 yards, with six rushing touchdowns on 112 carries. Lacy broke onto the scene last year, playing in 12 games, getting 56 carries for 406 yards and two touchdowns. Fowler also had good freshman year numbers, with 111 yards off 14 carries and running for a 36-yard touchdown against Georgia State.

Against Penn State, Richardson surpassed 100 yards in rushing for the first time this season, getting 111 yards and two touchdowns on the ground.

“I think it was pretty solid,” Richardson said. “I know I need to work on my pass protection a little more. I have to punch my holes a little bit more and be more patient. Overall, I think I did pretty well. I went out there and played every play like it was my last.”

While Richardson has had 148 rushing yards and five touchdowns this season, he knows he’s also got talent behind him.

“Everybody’s going to key on me just because they think I’m the running back, the man of the show, which I like,” he said. “I mean, I’m glad they do, because Eddie Lacy gets his carries, and he does it just as good as me. And he does better than me, so I’m not the one they really have to worry about.”

So far in 2011, Lacy has 143 rushing yards and one touchdown, and Fowler has 69 yards on the ground with one touchdown.

The three running backs each have something different that they bring to the field. Richardson has his experience and his strength. Known for loving the weight room, he’s strong enough to run through tackles.

Lacy’s nickname, “Circle Button,” comes from his spin moves, which the fans have seen a few of so far this season. In some plays, he’ll use two or more spin moves to evade defenders.

Then Fowler, a converted linebacker, has his size. At 6-foot-1 and 246 pounds, Fowler is both taller and heavier than Richardson and Lacy. He uses his size to power through the defense and get those hard short-yard downs.

Opposing defenses try to stack the box to stop Alabama’s run game, but neither Kent State nor Penn State have been successful so far this year. In the first game, the Crimson Tide had 183 rushing yards; they then had 194 rushing yards in the second game. Richardson said the defenses stacking the box won’t stop them from running the ball.

While the other defenses try to put a lot of pressure on the running backs, Alabama’s offensive line works hard to fight back and make holes. Up front are two very experienced linemen, William Vlachos and Barrett Jones.

“Both have done a really good job, from a leadership standpoint, with the offensive line,” said head coach Nick Saban. “I do think as the game wore on at Penn State, we started to win the line of scrimmage, and we started to insert our will as an offensive line.”

During the game, Saban said they changed their game plan from game one, when the team ran on the perimeter, to taking it up the middle more in game two.

“A lot of fans would say, ‘Well, you run the ball inside a lot,’” Saban said. “Well, when you’ve got big, powerful guys, maybe that’s the best way to do it.”

Richardson said it doesn’t matter to him if he runs outside or up the middle.

“I just want the ball,” he said. “I just love to run the ball. Try and get it anyway I can. Coach [Saban] made the best decision. He put us in the best place for where we can make that decision. I think it’s going to go good, because I’m sure I’m going to get outside next game or down the line. I’m not too much worried about it.”

Saban said this past game, the offensive line did a better job of blocking, which created holes for the running backs.

“Trent’s done a good job so far,” he said. “When you carry the ball, it’s a little bit of how we block and what we do. I think early in the game, especially, in two games in a row, we haven’t done a very good job up front. We did a much better job from an offensive line standpoint this week as the game went on. Trent took advantage of that, and Eddie took advantage of it as well. Trent had some tough yards.”

Another way the running backs get more room is when the wide receivers open up the passing game.

Defensive lineman Josh Chapman, who has faced these backs in practice, gets good reps in trying to tackle them.

“It’s about tackling them the right way,” he said. “It’s hard for me to go against two great backs every day, but it helps you also.”

Linebacker Courtney Upshaw said it’s a good challenge for both the running backs and the defense to face each other in practice.

“But for other teams, I’m sure it’s pretty hard to try to top them both [Richardson and Lacy], and Jalston Fowler also when he comes in the game, so I feel it’ll be a good challenge for our defense versus our offense,” he said.

Third Saturday in October: Is Tennessee the biggest rivalry?

Defensive line positions seem secure, but no such luck for quarterbacks with scrimmage looming