“We certainly had our opportunities,” said head coach Nick Saban. “We knew that we would have to play a complete game, and we would have to play our best game of the year that we are capable of, playing in a situation like this against a good football team. I don’t think we did that, especially in the second half.”

The Tide went into halftime leading 7-3, coincidentally the same halftime score of the 2009 game, except then, Alabama was down 7-3. Saban’s record leading at halftime prior to this game was 35-1, but now that record falls to 35-2, as Alabama’s overall record drops to 7-2 overall, 4-2 in the Southeastern Conference.

Defensively, the Tide was able to handle the Tigers’ two-quarterback offense very effectively in the first half, making stops where needed and only allowing three points. Offensively, Alabama also kept the play calling balanced to produce a lead, with 151 yards total, 72 rushing and 79 passing.

Then in the second half, LSU took the game and the momentum away from the Tide. There were four plays that really opened up the game and caught Alabama off guard.

“LSU was hungry for it,” sophomore safety Robert Lester said. “They came out and played like it. We played like we didn’t really want it, and it showed. LSU was able to take the win.”

On the Tigers’ first drive of the second half, on fourth-and-1, LSU’s punter ran for 29 runs on a fake punt. The defense was able to hold LSU to a failed field goal attempt on that drive, so the score remained 7-3.

On LSU’s next drive, Alabama’s defense wasn’t so lucky. A pass from LSU quarterback Jordan Jefferson to wide receiver Rueben Randle that went for 75 yards put the Tigers ahead 10-7.

“I wouldn’t really think it was a [coverage] bust,” Lester said. “I would say that it was more of LSU executing their game plan, being able to make that big play happen.”

Alabama came back to drive for a touchdown and maintain a solid lead, but then another long pass put LSU in field goal position, and so the Tigers tacked on three more to cut the Tide’s lead to only one point, 14-13, with most of the fourth quarter left.

LSU’s next drive resulted in another touchdown plus a two-point conversion, and when Alabama got the ball back down 21-14, Tide quarterback Greg McElroy was sacked and fumbled. LSU recovered at the Alabama 28-yard line.

That turnover resulted in a field goal, putting the Tigers up by 10 with five minutes left in the game.

Alabama did manage to drive quickly and score a touchdown on a 9-yard pass from McElroy to Jones, but with 3:17 left on the clock, the defense needed to make a big stop to keep the game alive.

The defense forced the Tigers into third-and-13 with plenty of time left, but then Jefferson hit Randle again for a big gain that sealed the game. Alabama got the ball back one more time, but there wasn’t enough time left in the game for a comeback.

With this loss, Alabama’s dream of returning to Atlanta for the SEC Championship game will likely stay just that: a dream.

Next week, the Tide takes on the Mississippi State Bulldogs in Tuscaloosa for another SEC Western game. With only three games left in the regular season, running back Mark Ingram said there’s still a lot left for this team to play for.

“No one should hang their heads,” he said. “We still have a chance at a 10-win season and a New Years Day bowl game. We still have a lot to play for.” 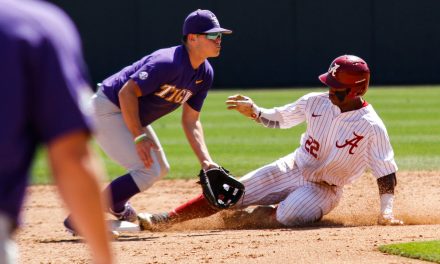 Robinson and Jones arrested during break

Table tennis looking to bounce back