Reliving the tradition with Gene Stallings

Gene Stallings became the fourth Crimson Tide head coach to win a national championship in 1992 when his team slaughtered the favored Miami Hurricanes 34-13.

Stallings will be inducted into the college football Hall of Fame in December and will be honored at halftime of Saturday’s game against No. 7 Florida with a National Football Foundation Hall of Fame On-Campus Salute.

GameDay: You played for Coach Bryant at Texas A&M. What was your favorite memory of him as a player?

Gene Stallings: Just being in his presence. I don’t know of anybody who enjoys practice or two a day practice, but I enjoyed playing for him. I was one of his captions my senior year. The way he handled his players and game situations. Even to the places we lived and ate he just wanted to be extremely good to us. That is why I resented the book Junction Boys a little bit. There is a difference of toughness and brutality. Coach Bryant was tough but he was not brutal and I felt like the movie and the book portrayed him that way and that wasn’t true at all. (laughs) It is funny though because we had never heard of Coach Bryant in Texas and he came and said pack some underwear and get on 2 busses. That’s when we went to Junction. We only came back in one bus and I laugh because that year we won 1 game. But before we were finished we won the championship and that’s coach Bryant said would happen.

GD: You were also on the other side with Coach Bryant, winning two national championships at Alabama with him as head coach and yourself on his original Alabama coaching staff in 1958. What did you learn from him that you applied to your head coaching jobs?

GS: He was so knowledgeable. What many people don’t realize is that we all wanted to please Coach Bryant. Players, coaches, alumni – they all wanted to. It is something about his presence. The knowledge he had for the game and the level of discipline and how hard he was to please on the field. We all just wanted to hear him say, job well done. So, we worked extremely hard to hear those kind words.

GD: Other than winning the national championship at Alabama as a head coach, what was your favorite memory?

GS: The real joy I got out of coaching was seeing the player graduate. Education is a key and graduating is very important. It makes the quality of life for that player better after football. That was a joy, but nothing will beat that game against Miami when we won the Championship. I still feel them carrying me on their shoulders. I know I had to choose a game other that that, but I just can’t.

GD: You played and Coached for Texas A&M, where your rival is Texas. How sweet was it to see Alabama beat Texas?

GS: It was great. I felt like Alabama obviously had the best football team. I really hated to see the Texas quarterback go out as quick as he did, because I thought he would make it a better game. Winning is winning though. I would of liked to see Alabama beat Texas with that quarterback, and I think that would of happened.

GD: Florida vs Alabama rivalry. When you hear that what comes to mind?

GS: It was a great rivalry. Florida won more games than we did in that series, but most of the games went down to the wire with an exception of one. They beat us pretty badly down in Florida. It started a long winning streak for us, though. Florida with Steve Spurrier in those days I felt like did a better job with the passing game than the rest of us did. If I was a high school quarterback who wanted to go into the pros and had a choice of going to Florida, [I would], because they just did better passing than what any team did, including Alabama.

GD: How big of an honor was it to find out you were selected to be in the College Football Hall of Fame?
GS: Obviously, you don’t get into the hall with good players and good coaching staff. You get in there because of some success. I would like for every player that played for me and coaches that worked for me, for them to feel like that they are in the Hall too, because without them, I would have not gotten this honor. Most of the people that go into the hall are players because the players make the game. But I am humbled by it I am excited [about] December 7 in New York when I am to be honored. 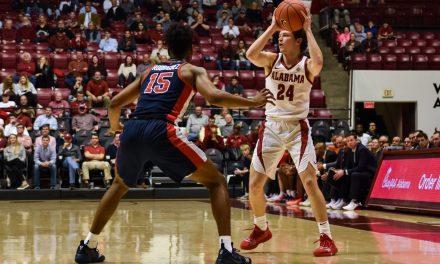